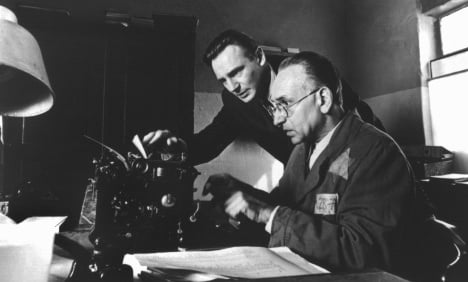 Pemper died Tuesday in Augsburg, southern Germany, and will be buried in the city’s Jewish cemetery Friday, when municipal authorities will order flags to be lowered to half-mast in his honour.

Born Mieczyslaw Pemper in 1920 in the Polish city of Krakow to a Jewish family, he was imprisoned at the Nazi concentration camp Plaszow, where he worked as the personal typist for its feared commandant Amon Göth.

While there he linked up with German industrialist Schindler whom Pemper, at great risk to his own life, supplied with a typed list of the names of more than 1,000 fellow prisoners to be recruited for work that was “decisive for the Nazi war effort.”

Schindler, an ethnic German from Czechoslovakia and a member of the Nazi party who first sought to profit from Germany’s invasion of Poland, is credited with saving the lives of some 1,200 Jews through such work schemes as well as bribes paid to German officers.

He died in anonymity in Germany in 1974 at the age of 66 but his story was unearthed by Australian writer Thomas Keneally.

US director Steven Spielberg adapted the book into the 1993 film “Schindler’s List” which won seven Oscars.

Pemper broke his silence about his own experiences under the Nazis when he served as a consultant on the film, according to a biography provided by Augsburg. He subsequently related his experiences to university, school and adult audiences.

Augsburg Mayor Kurt Gribl said Pemper, who moved to the city in 1958 where he worked as a management consultant, was a tireless advocate of intercultural understanding.

“With Mietek Pemper, the city has lost an important builder of bridges between the Jewish and Christian religions and a contributor to reconciliation,” Augsburg Mayor Kurt Gribl said in a statement.

The city awarded him a civic medal in 2003 and made him an honorary citizen in 2007.