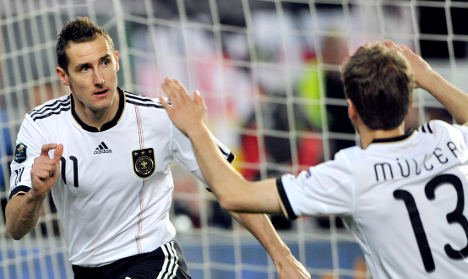 Klose, who turned 33 on Thursday, finally signed the deal late on Wednesday night and joins on a free transfer with his Bayern contract to expire at the end of the month after four years in Munich.

He endured a disappointing season for Bayern making most of his 20 league appearances from the bench and scoring just one goal while Germany teammate Mario Gomez netted 28 goals in 32 Bundesliga games for Bayern.

Bayern confirmed on Monday that talks over a new deal had broken down and Klose, the top-scorer at the 2006 World Cup, has wasted no time in finding a new club.

“Miroslav Klose is a Lazio player,” read a brief statement on the Rome club’s website and Klose completed the medical on Thursday before flying back to Germany to start his summer holiday with his family.

Klose has always said he wants to play on until Euro 2012, to be hosted by the Ukraine and Poland next June, which may well be his swansong, and the Germany coaches have insisted all national players must have regular football.

“I welcome the news,” said Germany coach Joachim Löw, with Klose reported to have secured a guarantee of first-team football at Lazio. “It’s good for him if he plays at a club where he is used regularly again.”

Klose is currently nursing bruised ribs which kept him out of Germany’s recent wins over Austria and Azerbaijan in Euro 2012 qualifiers.

With 61 goals in 109 appearances for Germany, he comes to Rome with a wealth of experience and is closing in on Gerd Müller’s all-time record of 68 goals for the German national side. His record of 14 goals in World Cup finals is second only to Brazil’s Ronaldo.

Having made his debut for Germany in March 2001, when he scored the winner in a 2-1 win over Albania, the Poland-born striker made his name at Kaiserslautern before joining Bremen in 2004 and then Bayern in 2007.

He helped Bayern win the German league and cup double in his first year at the club and played a key role as they reclaimed the league title in 2010 and reached the final of the Champions League.

Klose had been strongly linked to both Turkish side Galatasary and Spain’s Valencia before signing for Lazio.