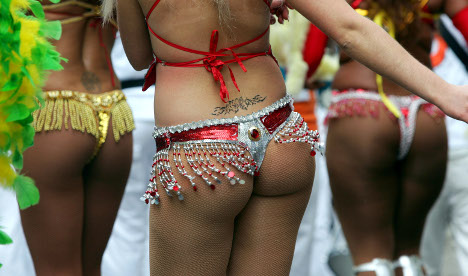 People of all stripes make their home in Berlin. Celebrate the colours, costumes, and rhythms of the world this weekend at the Carnival of Cultures street festival and parade. With Turkish indie-rockers, Brazilian samba dancers, and Jamaican poets the city becomes a smorgasbord of international festivities at this popular annual event.

Film nights and live performances give “Based in Berlin” that special vivacity that boosts it out of the regular art opening realm and into a multi-medium spectacle. Comprising nearly 80 Berlin-based artists and a handful of the city’s best art venues, this six-week event showcases one of the capital’s most exciting assets, its art makers.

Few portrayed the tension, the bravado, the romance, and the violence of the American West as well as the Italians. Spaghetti Western kingpin Sergio Leone was a master at recreating the drama of the Wild West. The Good the Bad and the Ugly, one of the Italian director’s many masterpieces, screens Friday night at Berlin’s Arsenal as part of the cinema house’s “Once Upon a Time in the West” series.

Did you know Afri-Cola was developed in Cologne? So was the iconic cigarette brand from the 1960s, Overstolz. From cars to chocolate, Germany’s fourth-largest city designed and manufactured many of the products we’ve grown to love. Celebrate all things Cologne-made at a new exhibition at the Museum of the City of Cologne, which opens Friday.

“A rose is a rose is a rose,” said Gertrude Stein. The floral artists whose artful arrangements fill the Palmenhaus Gallery this weekend might not agree. Go walk among the multitude of fragrant varieties at Friday’s exhibition opening, or see the gardens illuminated by candlelight Saturday night.

All aboard! Pack up the family and spend some time on the sea. This weekend, the historic steamer Elbe is offering tours around Hamburg Harbour. Take a journey past the Philharmonic Hall, the St. Pauli jetties, the Old Elbe Tunnel, and around Europe’s largest river island, Wilhemlmsberg Island.

We all tend to ponder the meaning of the world at one time or another. American artist Matt Mullican seems to have it all figured out. He’s got every human mood, experience, and activity organized in a colour and sign system that took 30 years to develop. See his early installations as well as later works in a new exhibition at the Haus der Kunst.

Opening of the Friedensengel Graffiti Gallery

With exquisitely slow, strange movements and ethereal make-up and costumes, the Japanese art form Butoh is one of the most extraordinary methods of performance. Classically trained dancer Aya Irizuki has been studying Butoh for ten years. Her motions will mesmerize you at Passage Maximilianstrasse, Saturday night.