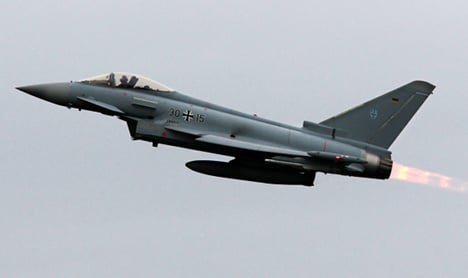 Speaking to reporters at a NATO summit in Brussels, German Defence Minister Thomas de Maizière said Berlin could envision deploying peacekeepers after the fighting was over.

But de Maizière made clear it was still early to define the international role in a post-Qaddafi Libya.

“We hope there will be a solution which does not require a military presence there but instead economic or infrastructure assistance, perhaps with the formation of security forces,” he said. “But should it happen differently, then we would examine it and we would constructively examine it.”

Germany was “ready to take responsibility in the post-conflict phase” in Libya, de Maizière said at the meeting of the transatlantic alliance late on Wednesday.

“We support the aims and activities of NATO,” said de Maizière said. “In this case, we’re not there militarily, but we’re engaged in Libya politically.”

His comments came in response to NATO Secretary General Anders Fogh Rasmussen’s call for a “broadening” of support for the alliance’s mission, as only nine countries are currently taking part in combat operations.

“The broader the support, the greater the sustainability,” said Rasmussen of the operations which in recent days have included the bombing of Libya’s capital, Tripoli.

Also at the summit, US Secretary of Defence Robert Gates called directly for Germany and other European nations to take greater responsibility in Libya.

In his address to NATO defence ministers, Gates told German officials Berlin should take an active military role, according to the Associated Press.

Traditional German allies the US, Britain and France are using missile strikes and a no-fly zone to protect civilians and help the rebels fighting Qaddafi’s forces, in a military intervention coordinated by NATO.

Germany, however, refused to participate after abstaining from a UN Security Council resolution authorizing the use of force As the only EU and NATO member to do so, the move left Berlin appearing isolated.