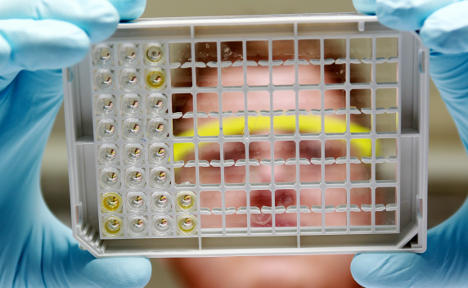 The latest victim was a 57-year-old man in Frankfurt who last month travelled with his wife to the northern city of Hamburg, an epicentre of the outbreak, authorities in the western city said.

The death of a 68-year-old man and a 20-year-old woman were also reported in the northern state of Lower Saxony. The toll is now at least 30, including one woman in Sweden who had recently returned from Germany.

More than 2,800 people were also ill in at least 14 countries with enterohaemorrhagic E. coli (EHEC) poisoning, which in severe cases can lead to renal failure. Most are women.

Germany had expressed hope Wednesday that the worst of the outbreak was over, with Health Minister Daniel Bahr saying the number of new infections was falling.

Spain’s Europe minister meanwhile secured a promise from German officials to make amends for earlier incorrectly blaming Spanish cucumbers for the outbreak by helping to repair the image of the country’s produce.

“The German government has agreed to make an effort to improve the image of Spanish produce in Germany,” Diego Lopez Garrido said in Berlin after talks with counterpart Werner Hoyer.

“Twenty-five percent of our vegetable exports are to Germany, it is our most important export market. Therefore it is also the duty of the German government to assist us with promotion.”

He described as “unfortunate” a false alarm by Hamburg’s top health official two weeks ago blaming Spanish cucumbers as a source for the outbreak that prompted an European Union-wide alert, later withdrawn.

“A mistake was made and mistakes remain mistakes but we must move forward together,” Lopez Garrido said.

He said Madrid would not sue Hamburg for compensation, and would not get involved in any private lawsuits by Spanish growers, who are losing €225 million ($328 million) per week according to the FEPEX umbrella body.

He described as “not necessarily sufficient” a revised offer from the European Commission for compensation of €210 million for producers across Europe.

Moscow’s blanket ban imposed last week on all vegetable imports from the EU was expected to be a point of contention at a two-day summit between Russian and EU leaders in Nizhny Novgorod starting Thursday.

With Russia the largest market for its vegetables, the EU has reacted furiously to the ban, calling for it to be lifted immediately.

A source in the Russian delegation underlined the awkward atmosphere ahead of the talks, describing the EU reaction as “abnormal” and suggesting its diplomats should publicly eat European cucumbers.

The search for the source of the outbreak continued, meanwhile.

Authorities in the eastern German state of Saxony-Anhalt played down the discovery of cucumber pieces with traces of the killer bacteria in the two-week-old rubbish of a Magdeburg family who fell ill.

“According to the information we have now, this is not a decisive lead,” a spokesman for the state social affairs ministry told news agency AFP.

Tests were continuing meanwhile at an organic sprout farm on which suspicion had fallen at the weekend.

Health Minister Bahr said Germany would maintain its warning against eating raw tomatoes, lettuce, cucumbers and various sprouts until the cause of the contamination was known.

The Robert Koch Institute national health centre said it was not certain whether the drop in new cases was linked to consumers avoiding the blacklisted vegetables.

In a sign that the outbreak was scaring people into avoiding Germany, Britain’s rowing team on Wednesday withdrew from the World Cup regatta in Hamburg later this month.