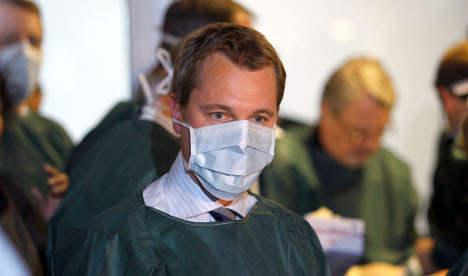 “There will likely still be new cases, and we must unfortunately still reckon with new deaths, but the number of new infections is clearly dropping, and the worst of the illness is behind us,” Bahr told ARD public television.

“I can’t yet cancel the warnings, but we now have reasons to hope as the number of new infections is continuously dropping,” he said some five weeks into the outbreak that has killed 25 people and left more than 2,300 seriously ill.

The German authorities have come under intense criticism in recent days as they first fingered cucumbers and then sprouts as being possibly responsible for the outbreak, despite tests coming back negative.

EU officials said on Wednesday they would like to see experts brought in from the United States and Japan. Some are concerned that the questionnaire German officials have been using with potential E. coli victims is not detailed enough.

They also have warned European governments against naming potential infection sources without the backing of strong scientific evidence.

“We have to rely on the experience and expertise across Europe, and even outside Europe,” European Union Health Commissioner John Dalli told the website of daily Die Welt.

Meanwhile, the Max Planck Institute for Infection Biology in Berlin called for a government coordinator to manage the crisis among the various government agencies dealing with it.

A federal government representative could increase cooperation between ministries said Director Stefan Kaufmann. He said Germans were becoming “unnecessarily confused” because of mixed messages from the government.

But Bahr rejected the German authorities weren’t up to dealing with the health crisis, saying there was no need to restructure the government response.

“This is typically German,” he said. “Immediately, people call for a new government authority and a new structure.”

He did, however, admit communication needed to improve.

Meanwhile, the European Union has said it is working toward providing compensation to farmers financially affected by the crisis.

But in Germany, calls also went out for compensation from the federal government.

The German Retail Federation (HDE) said losses for retailers and farmers alike had been tremendous.

“We have sales declines of 30 to 40 percent for fruits and vegetables,” group spokesman Kai Falk told Bild newspaper.

Johannes Singhammer, an MP for Chancellor Angela Merkel’s conservatives, told the Rheinische Post newspaper: “We need to agree on a national compensation scheme for farmers.”

Officials now acknowledge a source for the E. coli outbreak may never be found. But they say it is essential to keep searching since more people are getting sick.