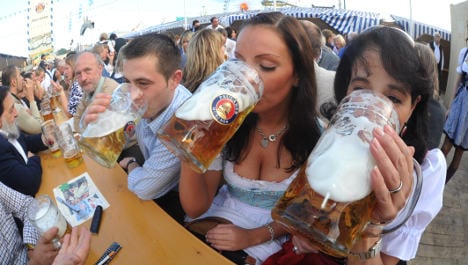 A Maß of beer will cost on average €8.97, according to Munich officials, as drinkers will have to fork out between between €8.70 and €9.20 for a mug of golden Bavarian ambrosia.

That range takes into account all the beer halls in the city, not just the large tents in the famous area known as the Wiesn, though it is expected that prices will be jacked up across the board.

Last year, the 200th anniversary Oktoberfest generally set drinkers back between €8.30 and €8.90 per Maß, which also represented a hefty hike. The Wiesn tents blamed last year’s rise on the need to construct additional bollards – barriers against vehicles – amid terrorism threats at the time, the €3.3 million cost for which was borne by the beer companies.

But city councillor Helmut Schmid of the centre-left Social Democrats said he did not accept that argument.

“The (security) investment is being spread out over 10 years,” he told daily Münchner Merkur on Tuesday. “It doesn’t justify a price hike.”

The conservative Christian Social Union failed meanwhile in its application to the city council to have the festival extended by one day in exchange for more stable prices at the Wiesn tents.

The council majority consisting of SPD and Greens councillors voted down the proposal, saying the festival would be an extra day long anyway, with the final Monday falling on German Unity Day, which is a public holiday.