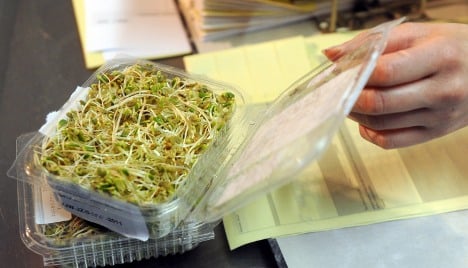 The comments came as criticism intensified of the government’s handling of the affair, with opposition politicians claiming federal ministers had botched the communication and the management of the crisis, which has claimed at least 22 lives.

After 23 out of 40 samples from the farm in Bienenbüttel, Lower Saxony, returned negative for the E. coli bacteria, a spokesman for the state’s Consumer Protection Ministry said: “We are holding to the suspicion.”

He said the tests were difficult because the contamination dated back two to four weeks. The sprout seeds might therefore no longer be showing evidence o the bacteria.

“The co-ordination of the search and the explanations to the public were sub-optimal,” he said.

By contrast, medical workers had performed well, he said, from hospitals to the manufacturers of dialysis equipment.

“The medical system has worked,” he said.

He also called on members of the public to donate blood.

“Anyone who is young and healthy should consider a blood donation. Everyone has to pull together now.”

Consumer Protection Minister Ilse Aigner rejected accusations the government had made a mess of the crisis.

“The crisis management is working — the authorities are concentrating all their powers upon the battle against this epidemic,” she told the Saarbrücker Zeitung.

She called on consumers to continue to avoid sprouts, cucumbers, raw tomatoes and lettuce, saying the advice of health authorities the Robert Koch Institute as well as the Federal Institute for Risk Assessment remained valid.

However she also expressed sympathy with the farmers and agricultural businesses hit by the EHEC outbreak.

“These businesses need our support now,” she said.

Hospitals, meanwhile, have expressed fear they will be financially overstretched by the flood of EHEC patients.

“I appeal to politicians in the face of the EHEC epidemic to rescind the planned financial cuts to hospitals,” Georg Baum, head of the German Hospital Federation, told daily Rheinische Post.

The needs of patients were only being met now because hospitals were sharing staff to fill gaps.

“The hospitals are doing all that is necessary today – regardless of whether they will get the benefits from the health insurers at the end of it.”