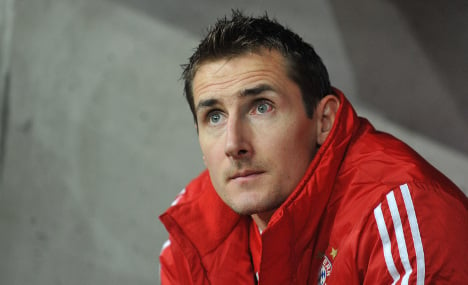 Klose, who turns 33 on Thursday, will part company with Bayern Munich, where his contract expires at the end of the month, and is set to announce his switch from the Bundesliga to the Spanish La Liga.

“Unfortunately, the talks with Miroslav Klose have not led to a positive outcome,” said Bayern CEO Karl-Heinz Rummenigge in a statement.

“We would have liked to have extended his contract,” he added, “but we could not agree on terms. Bayern Munich would like to wish Miroslav Klose and his family all the best for the future and to thank him for all his work with us.”

The Germany star, who has scored 61 goals in 109 international appearances, has rejected Bayern’s offer of a one-year contract with the option of an extra year, after having spent most of last season on the bench.

“I have had four very nice and successful years in Munich, so I would like to sincerely thank Bayern,” said Klose.

“It was something special for me to play for this team.”

Bild reported Klose wanted a two-year deal and was demanding a higher salary than Bayern were prepared to offer him.

Croatia striker Ivica Olic and new-signing Nils Petersen will also be competing for starting spots next season in Munich’s attack.

Klose has been at Bayern since 2007 and a host of clubs, including Italy’s Lazio and Premier League side Everton, are reported to have also been interested in signing him.

In four years, Klose has scored 53 goals in 150 games for Bayern and is closing in on Gerd Mueller’s all-time record of 68 goals for Germany.