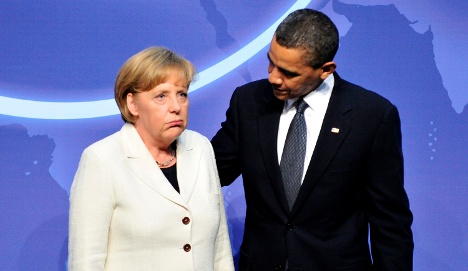 “I look forward to discussing with the Chancellor how we can enhance our work together to more effectively address the changes underway in the region, including in Libya,” Obama told the Monday edition of Berlin daily Der Tagesspiegel.

He praised Germany’s pledge to provide indirect military support for the struggle against the Libyan leader, Muammar Qaddafi, who has since February been brutally suppressing an uprising that has evolved into a civil war in which thousands have been killed.

But he also said that people in Libya, Egypt and other north African countries going through political upheaval deserved the help of Germany and the US.

“We know that there are many challenges ahead in the Middle East and North Africa. These are not easy transitions and they will take time. But, as I’ve said, this is also an historic moment of opportunity.

“The demands for political and economic reform that are coming from the people of the region are legitimate and must be addressed. Violence against peaceful protesters is unacceptable and must stop.”

Traditional German allies the US, Britain and France are using missile strikes and a no-fly zone to protect civilians and help the rebels fighting Qaddafi’s forces, in a military intervention coordinated by NATO. Germany, however, refused to participate.

Obama quoted something Merkel herself had said: “Freedom does not come about of itself. It must be struggled for, and then defended anew, every day of our lives.”

This refusal, as well as Germany’s abstention in the UN Security Council vote on a resolution authorizing the use of force, annoyed allies including Washington. Relations between Germany and the US are widely thought to have cooled lately. Many German commentators noted the fact that Obama skipped Germany during his recent European tour on which he visited Ireland, Britain, France and Poland.

Obama is set to present Merkel with the Washington the Medal of Freedom, the highest civilian honour in the United States. He praised the chancellor as a “good friend” of America and “one of my closest global partners.”

“My friendship with Chancellor Merkel is based on my deep respect and admiration for her as a leader and the fact that I trust her when she makes a commitment,” he said.

“I consult with the Chancellor on every important issue on my international agenda and I very much appreciate her pragmatism and her straight talk.

“We don’t always agree on everything; no two allies do. But in our meetings and discussions, we always speak honestly and openly, as close friends should, and I believe that our approach to shared challenges is stronger because of it.”