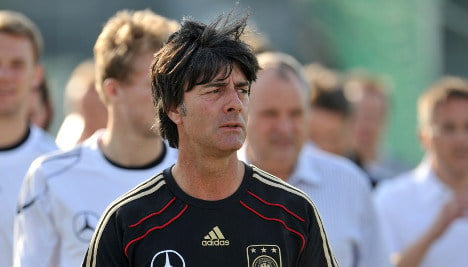 Victory in Baku on the Caspian Sea would give Germany a ten-point lead at the top of Group A and would almost certainly mean a place at Euro 2012, to be hosted by Poland and the Ukraine next June.

Germany left it late to beat Austria 2-1 in Vienna on Friday and a win in Baku would put them in an almost unassailable position at the top of the table.

With his team bidding to make it seven wins from seven, Löw flew from Vienna to Baku with a squad missing eight players, including first-choice stars Sami Khedira, Bastian Schweinsteiger and Miroslav Klose.

With a depleted midfield, Löw has called up Under-21 players Lewis Holtby of Mainz and Sebastian Rudy of Hoffenheim to complete his squad.

Despite having midfield problems, Löw has again ignored ex-captain Michael Ballack, who spent last season trying to hold down a regular place at Bundesliga side Bayer Leverkusen.

Rudy has cut short a holiday in Italy to make the long trip to Azerbaijan, but Löw brushed off any injury concerns with his side on the verge of qualifying.

“Since we met up, eight players have now dropped out with injury,” he said. “The situation as it is doesn’t concern me, I think we are in a decent position to play this game, even under these circumstances.

“Both players (Holtby and Rudy) have been on our radar for a while and they are midfielders, where we have most of our problems.”

Holtby, 20, is being widely tipped here as a star for the future and despite his father hailing from Liverpool, England, he opted for the white shirt of Germany and made his debut last November in the draw with Sweden.

Rudy is uncapped at senior level and is hoping to play a role in Baku.

Little resistance is expected from Bertie Voigts-coached eastern European minnows as Azerbaijan lost 2-1 in Astana to Kazakhstan on Friday and only escape being bottom of Group A by virtue of goal difference.

Tuesday’s game is Germany’s last of this season and Löw wants three points to finish on a high.

“We must pull out all the stops and lift ourselves again after a long journey,” said Löw. “Then we can go into a well-deserved vacation with 21 points.”

Löw admits his side are feeling the effects of a long season and are facing the last of three end-of-season games having beaten Uruguay in a friendly and now Austria.

“The players have mainly being doing regeneration work since Friday,” he said. “The batteries can’t recharge any more, you can see they aren’t as resilient in training.”

Löw says he does not expect a ‘footballing treat’ in Baku and his side may well have to grind out a win, but after Bayern Munich hot-shot Mario Gomez netted twice in Vienna, the 25-year-old is in impressive form.