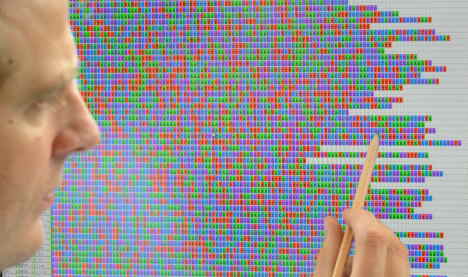 A portion of the E. coli genome. Photo: DPA

Germany’s national disease centre, the Robert Koch Institute (RKI), is looking closely at a harbour festival that took place in Hamburg from May 6 through May 8.

German media also reported Saturday a man in his 50s who died in Brandenberg may be the 20th victim, but the cause of death was uncertain because he had several other infections as well as E. coli.

According to a media report in the daily Lübecker Nachrichten, 17 people sick from the bacteria also ate at a restaurant in Lübeck between May 12 and 14.

Staff from the Robert Koch Institute (RKI) were investigating the situation there.

“The restaurant is not at fault, but the supply chain can potentially provide the crucial clue on how the pathogen came into circulation,” Werner Solbach, a microbiologist at the university hospital in Lübeck told the paper.

Lübecker Nachrichten reported Saturday that a group of Danish visitors ate at the restaurant for lunch. Later on, eight participants fell ill.

During the same period, another group in town for a seminar also ate at the restaurant. The 30 women were members of the Deutsche Steuer-Gewerkschaft tax union and hailed from around Germany.

“So far, we know of eight cases, some of them very serious,” Dieter Ondracek, the union’s chairman in Berlin, told the paper.

“One woman from North Rhine-Westphalia has died.”

Responding to a query from news agency DAPD, a spokesman for the Schleswig-Holstein Health Ministry confirmed that participants of the seminar had fallen ill following a visit to Lübeck.

Solbach told the Lübecker Nachrichten that another serious case appeared to be linked to the restaurant. A child from southern Germany became ill after visiting the restaurant for a family gathering during the same time period.