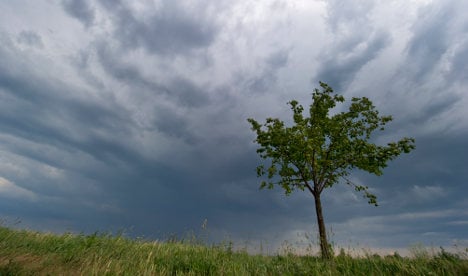 “The south and southwest must be aware of storms with the potential for severe weather on Saturday,” said DWD meteorologist Dorothea Paetzoldl in a statement, “but truly extreme weather will arrive on Sunday.”

“A low-pressure system moving over France will push damp Mediterranean air into the south and southwest and people will be able to ‘smell’ storms brewing in the stifling humidity.”

This will bring sustained rainfall and heavy gales everywhere in Germany apart from regions north and east of the Elbe river, and the wet weather is expected to continue and noticeably cool the air next week.

Friday’s skies will remain bright and cheery in most of the country but afternoon storms are possible in southern regions, especially near the Black Forest, the Swabian mountains and the Bavarian woodlands.

Temperatures will climb to between 22 and 27 degrees in most areas, while the Danube valley and coastal regions will reach only 20 and 18 degrees, respectively, cooled by light winds from the northeast.

Showers are possible in the south on Friday night, while the rest of the country will remain clear and cool at between 9 and 16 degrees.

The north will remain dry and sunny most of the day on Saturday, but afternoon clouds could bring showers and, in some regions, thunderstorms accompanied by heavy winds and hail.

Coastal regions will see highs of 21 degrees, while the rest of the country will stay balmy and humid at between 23 and 29 degrees.

Sunday will be mostly sunny and dry in the north and northwest, but clouds developing around midday will produce showers and, in some regions, extreme weather in the form of heavy gales and hail.

Moderate northwesterly winds will keep temperatures at around 20 degrees in coastal regions and 22 degrees in the northwest, while thermometers in the east could climb to a sultry 30 degrees.

Showers and thunderstorms will be widespread on Sunday night, with temperatures between 11 and 18 degrees.

The heavy rain will subside, for the most part, by Monday, though cloud cover in the west could bring storms in the afternoon. Temperatures will remain between 20 and 28 degrees.

The showers and storms will continue into Monday night, with the air cooling to between 11 and 16 degrees across the country.