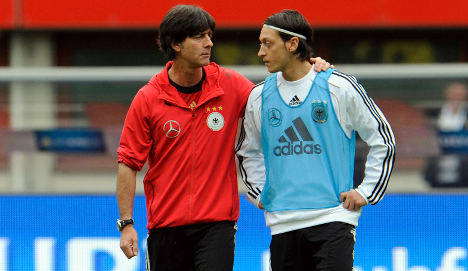 “After two defeats, Austria is like a wounded boxer,” Löw told a press conference at the Ernst-Happel stadium in the Austrian capital on the eve of the match.

“They’re going to throw everything into this game and we’re going to stand up against that. So I don’t expect any great football moments but a heated, intensive slugfest.

“The Austrians’ motivation could not be greater. Without a top performance on our part, it’s going to be hard,” added Löw.

Five points clear at the top of Group A after winning all their qualifying games, Germany will be without Bastian Schweinsteiger, Miroslav Klose and Per Mertesacker, while Real Madrid midfielder Sami Khedira was still doubtful ahead of Thursday evening’s final training session.

At least Lukas Podolski, who is carrying a light injury, has been declared it to play. Goalie Manuel Neuer will be making his first appearance since Wednesday’s confirmation of his munch-anticipated move from Schalke to Bayern Munich.

Dietmar Constantini’s Austria meanwhile can count on five players who have made their mark in Bundesliga clubs and will be hoping they can help revive a Euro 2012 campaign that has recently suffered due to paltry losses against Belgium and Turkey.

One player who has not made the squad is Marko Arnautovic, who was disciplined by his German club Werder Bremen in the latter stages of the season for going out to nightclubs.

Austria, eight points off the pace of Germany, goes into the match as the clear underdog but has warned the team will show Germany no respect as it goes in search of a shock result.

“We’re complete underdogs and have nothing to lose. We want to anger big brother, and maybe that will be enough for a draw or even a great upset,” captain and Twente striker Mark Janko said ahead of the sold-out qualifier.

“Inferiority complexes have no place here, everything’s possible in football,” added coach Constantini Thursday, urging his players to show the Germans “a dash of insanity and zero respect”.

Löw and Constantini have had plenty of time to get to know their opponents having both coached clubs in each other’s country.

The last time the two sides met, also at the Ernst-Happel stadium at Euro 2008, Germany beat Austria 1-0, eliminating the host country and securing their place in the quarter-finals.

For Germany, Friday will be just the first of two Euro 2012 outings in a week: on June 7, Löw’s side face Azerbaijan in Baku.