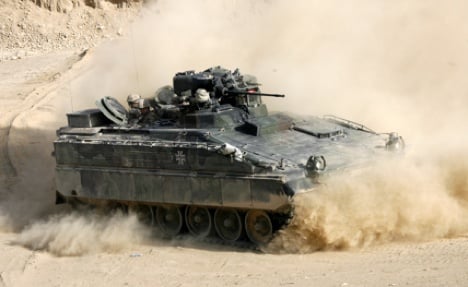 A Bundeswehr spokesman told news magazine Der Spiegel that the “Improvised Explosive Device” (IED), injured five other soldiers, two severely in Qandahari in the Baghlan region of the country.

The explosion from the device, hidden by the side of a road, struck a Marder armoured vehicle containing seven soldiers. The vehicle was reportedly completely destroyed. The casualty died before he could be brought to the field hospital in Kunduz.

Soldiers arriving on scene apparently were severely hampered rescuing those in the wreckage, because the vehicle contained ammunition and explosives likely to be set off by the fire that followed the explosion.

US helicopters, which have been supporting German troops for over a year, ferried the soldiers to Kunduz.

This is the fourth German casualty in Afghanistan in less than two weeks. The Bundeswehr has been intensifying patrols and operations in Baghlan for months in an attempt to free it of Taliban forces.

German General Markus Kneip, commander of the German forces in Afghanistan, narrowly survived a deadly attack on Saturday, when a suicide bomb killed two German soldiers and five other people at the Takhar governor’s office.