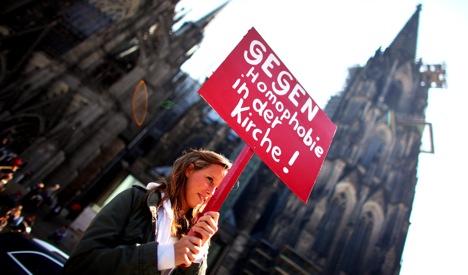 The Lesbian and Gay Federation in Germany (LSVD) has called the offer of advice an “insult” and an “imposition,” and accused the organization in question, the Catholic Physicians in Germany (BKÄ), of “lacking respect for homosexual and bisexual people.”

Following the heading “Homosexuality is not an illness!”, the BKÄ goes on to offer “therapy opportunities against homosexual tendencies.”

The therapy includes psychotherapy and homeopathic treatment, controversial in itself, that consisted of using high concentrations of substances like platinum.

The BKÄ insisted that it was only providing help for people who asked for it. “We know of many people with homosexual tendencies in spiritual and psychological distress,” BKÄ boss Gero Winkelmann told news magazine Der Spiegel. “If someone is unhappy, sick, or in distress then he or she should be able to find opportunities to find help on our website.”

Winkelmann runs a private homeopathic practice in Unterhaching, Bavaria, and was previously active in a small political party called the Christian League.

The LSVD has branded the “therapy” as unacceptable. “The offers are dangerous,” spokeswoman Renate Rampf told the magazine. “They exploit the insecurities of homo- and bisexual young people and their parents.”

Rampf also said the treatments would be especially destabilizing because they couldn’t work. “All serious specialists in the area agree that sexual orientation is shaped in earliest childhood,” she said.

Winkelmann insisted that his organization was not trying to hurt or “impose” an illness on anyone. He also clarified that his website did not present the official Catholic church view of homosexuality, but was a private opinion.

“This is not about outing or intolerance,” a statement on the website reads. “It’s a Christian and medical contribution to an age-old issue.”

The website also includes the apparent statement of a “homosexual from southern Germany,” who found to his “joy,” that the association “does believe it’s possible to change homosexual tendencies.”