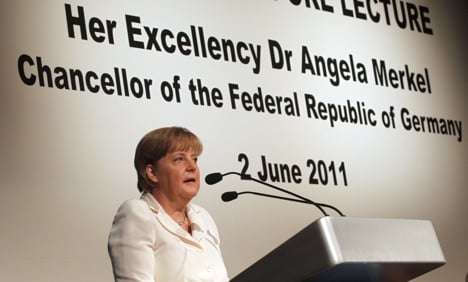 “Looking at the discussion about Myanmar (Burma) and its interest in taking over the presidency of ASEAN, I am a little bit concerned,” she told a forum in Singapore, a founding member of ASEAN.

Merkel told an audience of government officials, foreign diplomats and academics that “the present leadership of Myanmar has not really proved that they are serious about embarking on the road of democracy.”

ASEAN diplomats say Burma is pressing to take its turn in 2014, which means holding summits in a country considered an outcast in the international community.

“We think that perhaps countries in your region ought to discuss these matters openly because standing up for democracy and for freedom, this is not only a regional commitment, it’s a global commitment that we’ve all entered,” Merkel said.

The bloc has a principle of non-interference in the internal affairs of members despite criticism over the years that it is little more than a talking shop.

Burma skipped its turn to chair ASEAN in 2006 due to international pressure for democratic reforms, but only on the condition that it could ask to lead the group at a later time if it felt it was ready, regional officials said.

Campaign group Human Rights Watch said in May that giving the chair to Burma would be an embarrassment for a group that is already struggling for credibility.

“Rewarding Burma with ASEAN’s chairmanship after it staged sham elections and still holds 2,000 political prisoners would be an embarrassment for the region,” HRW Asia deputy director Elaine Pearson said in a statement.

“ASEAN leaders need to decide if they will let Burma demote ASEAN to the laughing stock of intergovernmental forums.”

Burmese opposition leader Aung San Suu Kyi was released from house arrest in November shortly after an election, Burma’s first in 20 years that led to the handover of power from the military to a nominally civilian government.

Her release was welcomed worldwide, but Western governments who impose sanctions on Burma want the new government to do more to demonstrate its commitment to human rights.