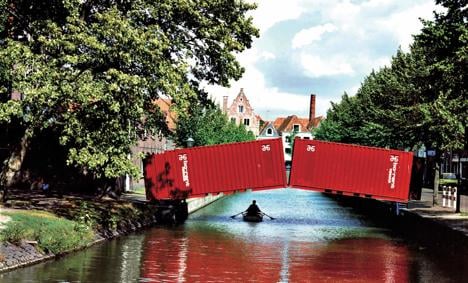 Without light humankind would be adrift in a dark world devoid of that beloved medium known as as the silver screen. From Wim Wenders’ Wings of Desire, to Wong Kar-wai’s In the Mood for Love and Stanley Kubrick’s Barry Lyndon, Berlin’s Arsenal screens nine films this month, where light plays a starring role.

The premiere of Miguel Álvarez-Fernández’s opera Representacion 3 kicks off this two-day festival of sounds art. Video installations, sound installations, and concerts by artists and composers from Germany and Spain create an aural fantasia at Villa Elisabeth.

Nelleke Beltjens: They Don’t Know Either

The straight line is a fundamental element of drawing. But what about the broken line? Dutch artists Nelleke Beltjens creates dynamic works that revolve around fragmented lines that intersect at various points, creating a rhythmic, sculptural, extraordinary design in two dimensions.

Empty shipping containers act as art galleries in Karlsruhe, They form apartment blocks in Melbourne. And in Antarctica, scientists use one as a reading room. With the global economy in the slumps, shipping containers sit empty all over the world. A new exhibition, which opens Wednesday in Düsseldorf features some fantastic ideas for what to do with them. Check out twenty-four ingenious architectural models at NRW-Forum.

Uncle Vanya, The Seagull, The Cherry Orchard… There’s a place in your heart for them all. Theatre Language Studio Frankfurt utilises a little creative license with dear Anton’s works in their new production “The Chekhov Project.” Go see a new twist on the Russian playwright’s classics.

That smoky glamour. That unstoppable panache. Marlene Dietrich was one of a kind. German actress Carola Moritz channels the iconic “blue angel” at Katakombe, Saturday.

Twenty-two years ago, the French director Jean-Pierre Jeunet created a short film called “Foutaises.” Twelve years later, his hit movie “Amelie” caused a sensation. Directors like Jeunet, who made short films during their formative years are the focus of the Hamburg film festival’s special program “Early Shorts by Famous Artists.” See them in addition to the excellent array of new works being shown in this year’s programme.

Each year, Hannover’s Trammplatz becomes a stage for international jazz artists. For a swinging good time, gather in front of the New City Hall Thursday and dance along to Sharrie Williams and the Wise Guys, the Hannover Big Band, The Gentlemen of Swing, and other jazztastic music makers.

A superstar among kings, King Ludwig II possessed a distinctive eccentricity that set him apart from his tepid royal mates. Dedicated to the pursuit of beauty, Ludwig was a “Fairytale King.” Journey outside the city this week to a splendid island palace where a new exhibition offers an intimate look at an iconic German monarch.

Soloists from the Munich Chamber Orchestra interpret the music of one of Austria’s most interesting contemporary composers, Saturday night. Rich with aspects of The Harmonic Series, microintervals, and French Spectralism, the music of Georg Friedrich Haas often takes into account the architecture of the space in which it is performed.

Performance is an integral part of education Europe. Geared toward a young audience, Think Big presents a varied interdisciplinary program of everything from Hip Hop dance to dance theatre. The action starts Tuesday at Muffatwerk.