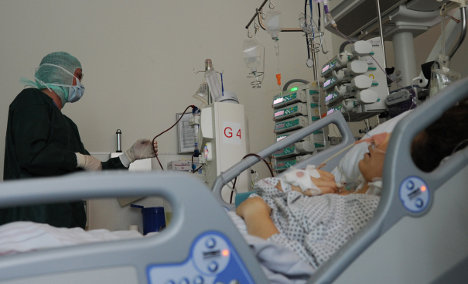 The new figures came as doctors in Schleswig-Holstein reported that the bacterial illness was also causing unusual neurological effects including epilepsy.

Seventeen people – one in Sweden and the rest in Germany – have now died from the virulent form of enterohamorrhagic E. coli (EHEC), which can cause bloody diarrhoea and kidney failure known as haemolytic uraemic syndrome (HUS).

In the past day, the number of cases rose in Lower Saxony by 80 to 344, while in Hamburg another 99 cases were identified, bringing the total in the port city to 668.

“We are again seeing a clear rise in cases of people sick with EHEC and HUS,” Hamburg’s Health Minister Cornelia Prüfer-Storcks said. “The situation remains worrying and it is definitely too early to give any kind of all-clear.”

An 84-year-old woman who died on Sunday has now been identified as the 17th confirmed victim, the Lower Saxony Health Ministry announced Wednesday.

Authorities continued desperately to search for the source of the bacteria as Spain vented its anger over the earlier statements by Hamburg authorities that they had identified Spanish cucumbers as contaminated – a claim they have since retracted.

Spain said it was considering legal action over what it says are €200 million in losses for its farmers.

The official number of confirmed cases according to the Robert Koch Institute, the government’s public health adviser, stands at 1,064. Of these, 470 have become ill with HUS. All states are affected by three quarters of the HUS have been across northern states: Schleswig-Holstein, Hamburg, North Rhine-Westphalia and Lower Saxony.

A worrying new dimension has been reported in Schleswig-Holstein – the worst-affected state with 121 cases. Every second patient being treated for HUS at the state’s University Hospital is developing unusual neurological complications, ranging from headaches to speech problems and up to epilepsy.

“We are observing unexpected characteristics to the illness with which we’re not familiar,” said Hendrik Lehnert, director of the hospital’s Lübeck campus.

Some 91 patients are currently being treated for HUS at Lübeck and the hospital’s other campus in Kiel, 23 of them in intensive care. The neurological problems were starting about three or four days after the HUS symptoms began.

The hospital’s doctors have changed tactics and begun using antibiotics earlier than they were before, said director Stefan Schreiber.

“We have learnt something,” he said, referring to knowledge gained from an autopsy on a patient who died, which revealed that the bacteria inflamed nearly the whole stomach and intestinal tract. “The bacteria live much longer that we previously thought.”