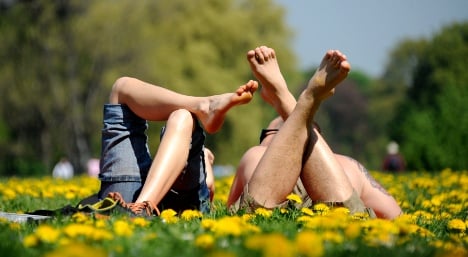 High pressure system Christine will please those planning a mini-break on the national day off. The sunny weather should continue in much of the country on Friday, though storms are expected in the south and these will move north through the country over the weekend.

“There will be pleasant temperatures around much of the country on Thursday,” DWD meteorologist Ansgar Engel said in a statement. “Only to the very south and southeast will it be somewhat cloudy with even a few drops of rain.”

On Thursday, sunshine is expected in the north and centre of the country, with only the occasional clouds. The south will see some heavier cloud with rain, or at least a shower or two, possible in the foothills of the Alps and in southeast Bavaria.

High temperatures will range from 20 degrees to 25 degrees, though the maximum could be a cool 16 degrees in the deep south. Light to moderate winds will blow from the north to northeast.

“On Friday, the weather will divide into two parts,” Engel said. “From the south, warm and muggy thunderstorm air will come our way, while in the north, much drier air will continue to dominate. The likelihood of rain and thunderstorms will climb on the following days, expanding up from the south.”

Thursday night should clear in most parts, though clouds and a few drops of rain are expected in the south. Overnight lows will range from 13 degrees to 8 degrees.

Friday will be mostly clear and sunny, with some cloud in the south and southeast but little rain. High temperatures will range from 20 degrees to 26 degrees, perhaps even a little warmer in the west.

The moister air will move up to the central highlands and further north into the weekend, bringing the odd shower or thunderstorm. The weekend will bring more summer temperatures of 25 degrees or higher.

Saturday morning will remain sun and dry in the north though cloudier skies will build in the afternoon with isolated showers. In a few parts of the country, heavier rain, hail and squalls can be expected. High temperatures should range from 23 degrees to 29 degrees.

But by Sunday, only the northern lowlands will still be holding onto the drier air.