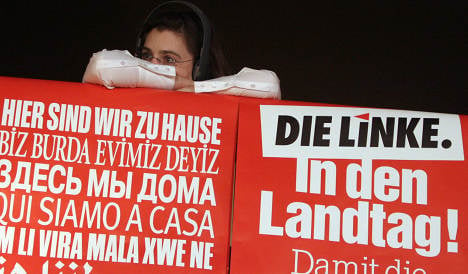 “If the basic values of the party are neglected, there must be consequences, up to separation,” the party’s parliamentary whip in the Bundestag, Dagmar Enkelmann, told the Wednesday edition of Der Tagesspiegel newspaper.

The call comes as The Left faces continuing criticism that some members of the socialist party have anti-Semitic and anti-Israel leanings.

The Left has also been embarrassed by a series of questionable incidents involving Israel and the Jewish community.

In April, a flyer featuring a swastika and the Star of David was found on the website of the party’s regional chapter in Duisburg, prompting national outrage.

And in May, Hermann Dierkes, a party member in Duisburg, compared the Israeli government to Nazis.

More criticism has come after the Frankfurter Rundschau wrote about an academic report from University of Leipzig and University of Giessen professors labelling The Left party having an anti-Semitic problem.

“A power has established itself within the parliamentary spectrum of The Left party, which tolerates anti-Semitic positions,” the report said.

Enkelmann told Der Tagesspiegel that The Left had a responsibility to ensure there was no attempt to qualify the crimes of Holocaust and that there could be no questioning of Israel’s right to exist in peace next to an independent Palestinian state.

“I’m sick and tired that some things are continually questioned,” she said.

Jan Korte, an MP for The Left, said there must be an “unambiguous discussion” about the issue, but he said that did not mean that Israel could not be criticized.

Meanwhile Petra Pau, a Bundestag vice president for The Left said she had the feeling some party members were being provocative “with intent.” But others “think too little about how small symptoms can become full blown,” she said.