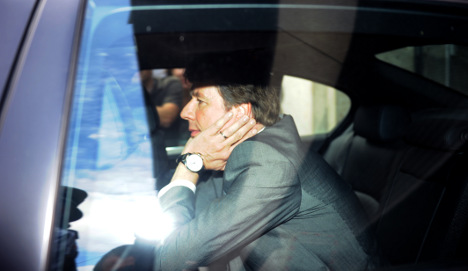 The roller-coaster 44-day trial ended with the ruling by a court in Mannheim, Baden-Württemberg, of in dubio pro reo, or when in doubt, for the accused.

But it remains to be seen if Kachelmann, long Germany’s best-known weatherman, can ever return to the nation’s leading news programme Tagesschau on public TV channel ARD.

Judge Michael Seidling stressed the court was not actually convinced of Kachelmann’s innocence, and nor did it necessarily believe that his former girlfriend had made a false accusation. Rather, the grounds for suspicion had in the course of lengthy trial been “diminished but not banished,” he concluded.

The judge sharply criticised defence lawyer Johann Schwenn, whom he said had repeatedly shown a lack of respect and decency before the court. But the sentence was greeted with jubilation in the courtroom by Kachelmann’s supporters, prompting cries from the public gallery.

The prosecutors accused the 52-year-old Swiss citizen and founder of the Meteomedia company of violently raping his former long-time girlfriend in February last year. The woman said he had held a knife to her throat as he attacked her in her apartment in the Rhein-Neckar county. Prosecutors had sought a jail sentence of four years and three months.

The 14-month ordeal began in March last year when police arrested Kachelmann at Frankfurt airport as he returned from Vancouver, Canada, where he had been covering the Winter Olympics for ARD.

What followed was a veritable saga as Kachelmann was detained on remand, and then released. His former girlfriend changed details of her allegations and at one point a court in Karlsruhe ruled that Kachelmann should be released from remand because the cases rested on the accuser’s word against the defendant’s.

An expert commissioned by Kachelmann’s team, Bernd Brinkmann, was accused by the state prosecutors of bias.

The accuser at one point turned up to the Mannheim court shielding her face from photographers by holding up a book titled, “The Sociopath Next Door.” In September, she told reporters she no longer wanted to take part in the trial, though she eventually gave four days’ testimony.

Schwenn accused the magazines Focus and Bunte of trying to influence the trial. He later forced Germany’s most famous feminist, Alice Schwarzer, onto the witness stand after she had written for Bild newspaper about her contact with the accuser’s therapist. Schwarzer exercised her right to refuse to testify on matters arising from her work as a journalist.

State prosecutors Oskar Gattner and Lars-Torben Oltrogge reported that Kachelmann’s ex-girlfriend had lied to accusers but maintained there was still a case to be heard.

Prosecutors said Tuesday they would consider an appeal.

Following Tuesday’s verdict, Meteomedia announced he would return to work at the company he helped found. Kachelmann is also expected to return to the airwaves on Radio Basel, at which he used to take part in a weekly radio show, according to editor-in-chief Christian Heeb.

Meteomedia said in a statement: “Jörg Kachelmann will immediately return to his role at the Meteomedia group.”