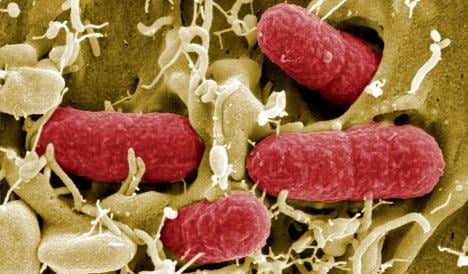 The latest victim was identified by officials as a middle-aged woman from the state of North Rhine-Westphalia.

There were signs the government was still struggling to control the repercussions of the outbreak that has affected more than 1,200 people, mostly in the north of Germany.

Health experts warned that illnesses and deaths were likely to continue rising in the near term. They emphasized that the source of the outbreak was still unclear, although Spanish cucumbers were suspected of being at least partly responsible.

“At the moment, we can’t reliably say what the actual source of contamination is,” said RKI director Reinhard Burger.

Many German supermarkets and shops have removed all Spanish-grown vegetables from their shelves, but the Russian government on Monday banned all vegetable imports from Germany and Spain.

People who ingest E. coli may take up to 10 days to become ill. The most severe cases of ingestion lead to haemolytic uraemic syndrome (HUS), a disease that can result in acute renal failure, seizures, strokes, coma and death.

Hamburg has been particularly hard hit by the health crisis, with hospitals in the northern port city inundated by the sick.

Eppendorf University Hospital Professor Jörg Debatin said: “The clearly progressing course of the illness has us worried. We have to be prepared to lose even young patients.”

Nearly 60 patients with HUS were being treated at the hospital said neurologist Rolf Stahl on Monday.

“About a third have lost all kidney functions” and have had to be put on dialysis, he added.

The hospital said the number of patients being admitted was dropping, but it warned of possible new cases because of HUS’s long incubation period.

By Saturday, more than 467 cases had been registered in Hamburg. Daily Bild reported that 30 of these cases were critical.

Despite an overall sense of confusion about the outbreak’s source and severe criticism from farmers, authorities continued warning people against eating raw vegetables on Monday.

The Spanish government expressed alarm at damage being done to its farming sector and requested a “response” from the European Union.