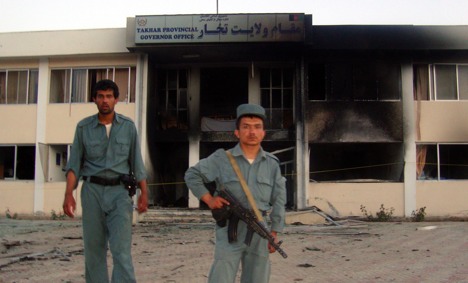 “I ask the German public, especially now, to support our mission in Afghanistan,” de Maizière said in Berlin. “Our soldiers belong to us all.”

The bomber struck after a meeting about security held at the office in the provincial capital Taloqan, in the latest instance of high-profile target selection by the Taliban, who claimed responsibility for the attack.

Four Afghans, including the chief of police for northern Afghanistan General Mohammed Daud Daud, was among the dead, he said.

Qutbuddin Kamal, a senior aide to the provincial governor, confirmed that Daud had been killed. “At the end of the meeting, when we wanted to leave, a suicide bomber waiting in the corridor blew himself up,” he said.

According to Zemarai Bashary, spokesman for the Interior Ministry, 12 people were wounded.

Daod was a key figure in Afghanistan’s recent history, a former military commander of Ahmad Shah Massoud’s Northern Alliance who oversaw the siege of Kunduz, the final major battle of the US-led invasion of Afghanistan in 2001.

A former deputy interior minister, when he was the top counter-narcotics official in Afghanistan, he accused the Taliban of profiting from the opium trade by forging an alliance with drug smugglers and taxing farmers.

He also served at one point as governor of Takhar, reportedly at the request of the British, who considered him the country’s cleanest governor. He was appointed chief of police for northern Afghanistan last year.

Earlier, he had been part of the Afghan mujahedeen fighting against occupying Soviet troops.

The Taliban, which has been fighting an insurgency against the government in Kabul and its Western allies since it was ousted from power in 2001, claimed responsibility for the attack.

“One of our mujahedeen carried out the attack inside the Takhar governor’s complex during a meeting about security,” Zabihullah Mujahid, a Taliban spokesman, said.

“Most (of the participants) were killed, including Gen. Daud Daud, who was chairing the meeting, the chief of police (for Takhar province)” and German and American soldiers, he said.

Daud’s killing comes two months before international troops are due to start handing over control of security to local forces and withdraw from the country, a process that is due to be completed by 2014.

There are currently around 130,000 international troops, with some 5,000 from Germany, stationed in Afghanistan.

Takhar is normally a relatively quiet part of the insurgency-wracked country, although earlier this month 12 people were killed in Taloqan when Afghan police and German soldiers opened fire on 2,000 demonstrators protesting against a NATO raid.

Neighbouring Kunduz province has become a Taliban bastion in recent years, and has seen an increase in the frequency of insurgent assaults.

The Taliban have recently stepped up targeted strikes against high-profile, high-security sites across Afghanistan, in what analysts say is a strategy to discredit the Kabul government and its allies.