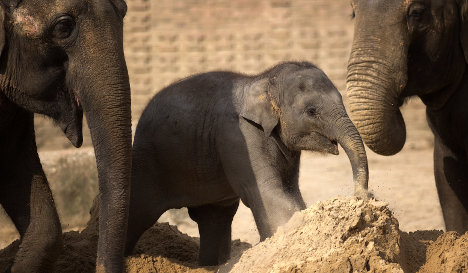 Two-year old female elephant Ko Raya died on Friday, after suffering from a type of elephant herpes. It is the same disease that killed her sister Shaina Pali just eight weeks ago.

Ko Raya had been under the weather for the past few days and on Friday morning she was fell over during a mud bath and died.

“Her mother wanted to get her to stand up,” eyewitness Sigrid H. (75) told mass-circulation paper Bild. “Ko Raya didn’t have any more strength. Suddenly all the elephants started trumpeting together. I think they wanted to call for help.”

Veterinarian Dr. Andreas Ochs explained that although the zookeepers rushed to the elephant, it was too late. “She was already dead.”

The herpes virus can be fatal to Asian elephants and it has already killed two other animals at the zoo over the past few years. “The virus spreads through the blood,” Ochs explained to Bild. “It attacks the internal organs, damaging the liver, intestines and heart muscles.”

Zoo Director Bernhard Blaskiewitz says the staff feel helpless in the face of the deadly disease which has left the zoo with just six elephants. “There is simply nothing we can do.”