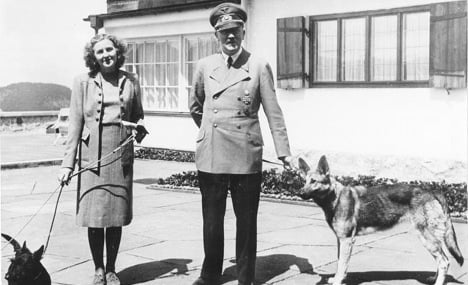 Bondeson, a researcher at Britain’s Cardiff University, stumbled upon the information in German periodicals while conducting research in Berlin for his book about dogs.

But the quest for loquacious canines didn’t actually start with the Nazis, Bondeson told The Local, but years earlier with figures like Clever Hans, an infamous German horse who was supposedly able to figure out complex math problems.

Although the horse was proven a fraud – it was shown that instead of solving problems, he was responding to suggestion from his master – the idea that animals could possess surprising intelligence became increasing popular among Germans.

Rolf the dog – an intellectual Airdale terrier who could supposedly tap out poetry with his paws and demanded to fight in World War I – pushed the hype to new levels.

By the time Adolf Hitler came to power in 1933, an entire movement of animal psychology had been established that fit well with the image of the Nazi leader doting on his German Shepherd Blondi.

“Part of the Nazi concept was that a good Nazi was a friend of animals,” Bondeson said. “So, for example, when the Jews were deported from certain German cities, nobody bothered about the Jews, but there were many letters in the newspaper saying ‘well what about these poor doggies that the Jews had owned’?”

By the late 1930s, Nazi patrons were funding research into getting dogs to talk, although the idea occasionally attracted controversy. One woman courted trouble when her dog was reported to say something like “Mein Führer” and the fascists apparently were angered by a Finnish man teaching his mutt to raise its arm in response to the phrase “Heil Hitler!”

But Bondeson said an animal language school was eventually founded where dogs were meant to be trained to communicate by tapping their paws or imitating the human voice. The school even received praise from Hitler himself, according to the researcher.

The school was ultimately unsuccessful, although the proprietor claimed the dogs were trying talk, Bondeson said.

Bondeson said it’s still unclear what the Nazis hoped to achieve with the odd programme, although it clearly received support from highly placed party leaders.

“It is not known yet, due to the scarcity of original sources,” Bondeson said, who mused in his book about the possibility of “super-intelligent canine stormtroopers.”

But he admitted the Nazis were far from developing an army of dogs.

“These were like early experiments,” he said. “It was more an experiment to see if it could be done at all.”

After World War II, the idea that animals could talk largely faded away in Germany. And it’s clear that the idea that whole idea was either a great scam or an example of people deluding themselves, Bondeson said.

“Modern research has pointed out that dogs are much more clever than people give them credit for. But still, dogs have no business writing poetry, learning foreign languages or speculating about God,” he said.

”Amazing Dogs: A Cabinet of Canine Curiosities” is available in bookstores in the United States and Britain and on websites such as amazon.com.