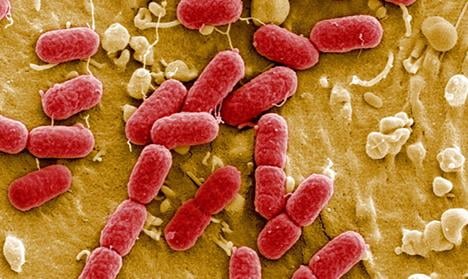 Reinhard Burger told ARD’s Morgenmagazin that 60 new infections had been detected between Thursday and Friday. Roughly 200 cases of infection by E. coli bacteria have been confirmed in Germany, many of them in the Hamburg area, though hundreds more are suspected. Ten cases have been reported in Sweden, four in Denmark, three in Britain and one in the Netherlands.

Authorities warned people who had recently visited Germany to be on the lookout for symptoms of E. coli infection. The most severe sufferers are hit by haemolytic uraemic syndrome, a disease that can result in acute renal failure, seizures, strokes and coma.

“People who have recently visited Germany should pay attention to symptoms, such as bloody diarrhoea, and accordingly consult their physician,” said Frederic Vincent, the European Commission’s spokesman for health issues.

Officials also homed in on the outbreak’s sources, identifying Spanish cucumbers from the provinces as Alneria and Malaga as being partly to blame.

“The Andalusian authorities are investigating to find out where the contamination comes from and when it took place,” said a spokesman for the Spanish food safety agency AESA on Friday.

“This type of bacterium can contaminate at the origin or during handling of the product,” the spokesman said. Spain was seeking further information from the German authorities, he said.

There have been no reports of contamination within Spain, AESA said.

Another suspect batch of cucumbers from the Netherlands, but traded in Germany, was under investigation while German health officials continued to hunt for other potential sources of contamination.

Meanwhile, Gerd Sonnleitner, the head of the German Farmers’ Association (DVB), called for stronger regulation of imported vegetables and said there has been unwarranted fearmongering about German vegetable products.

“We have very strict rules over the entire chain on controlling and accepting what we think is right,” Sonnleitner said. “Unfortunately imports are tested much more laxly.

“We demand that the EU common standards exist. The rules will also apply to third countries that supply us, ” he added, explaining that German farmers have been hurt even though the outbreak is coming from elsewhere.