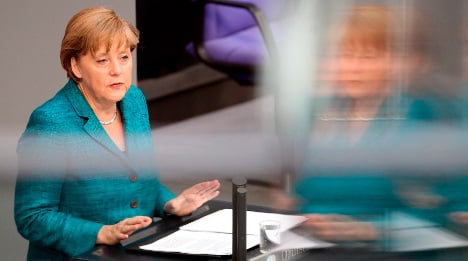 As Merkel prepares for a Group of Eight summit in Deauville, France, on Thursday and Friday, she told the German parliament that such nuclear plant checks needed to extend beyond Germany and the European Union.

The demand, which continues Merkel’s dramatic about-face on nuclear power in the wake of Japan’s Fukushima disaster, may get a cool reception from other leading industrial nations relying on atomic energy.

Her previous pressing of European neighbours on nuclear safety has raised hackles. But the EU agreed on Wednesday to carry out such “stress tests,” which put facilities through a range of simulated challenges to determine how safe they are.

“We need an assessment of safety standards also at an international level,” Merkel said, insisting that the “highest standards” should be maintained through tests around the world.

Germany also wanted to become a model to the rest of the world on climate protection and producing green power.

“We want to reach the era of renewable energy more quickly,” she told the Bundestag.

Also in her address to parliament, Merkel vowed economic assistance to the fragile democratic uprisings in Egypt and Tunisia. A financial package to support the so-called “Arab Spring” is set to be top of the agenda for the Deauville summit.

Help needed to come quickly “because time counts in this region,” Merkel told parliament. There was a “historic European responsibility” to stand by the side of people who had taken to the streets to fight for their freedom and democratic rights, she said.

The developments that started in Tunisia and spread to Egypt but stalled in Yemen and led to brutal crackdowns in Bahrain and Syria, as well as outright civil war in Libya, were “a historic opportunity,” she said.

There needed to be a “partnership for jobs,” she said, given that lack of employment opportunities could be a major sticking point for the futures of Egyptians and Tunisians. Germany and German business should help with job creation and introduce 10,000 extra traineeships in Egypt, she said.

She also promised Tunisians help with training and support for small and medium-sized businesses.

These programmes could be financed with €300 million over the next four years, she said. The government would also commit €30 million this year to support democratic transitions and make available an additional €100 million next year.

Regarding the brutal crackdown by the Syrian regime against the uprising there, Merkel said that “only through crude violence against their own people” had the government of Bashar al-Assad held onto power. The country was a “huge problem case and therefore we should do all we can to condemn the violence and condemn it very clearly.”

The events in the Arab world are expected to be top of the agenda for the G8 meeting. The question of who will replace Dominique Strauss-Kahn – facing rape charges in New York – as head of the IMF is not officially on the agenda. But it is expected to be the subject of much private discussion between leaders, especially as host country France’s Finance Minister Christine Lagarde is the frontrunner.