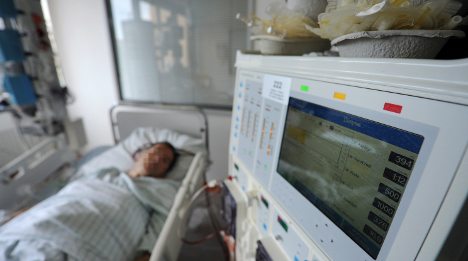 An EHEC patient is treated in Hamburg. Photo: DPA

Consumer Affairs Minister Ilse Aigner and Health Minister Daniel Bahr called for everyone to take particular care with food hygiene at a press conference in Berlin.

But they both rejected the idea of a crisis team, which is generally only needed if international information sharing or other such measures were needed.

The two ministers said they were both confident that the public health authority Robert Koch Institute (RKI) would identify the root of the problem.

“We are optimistic that we will soon be bordering on being able to say where the source is,” said Aigner.

Reinhard Burger, president of the RKI, had already said earlier in the day that it was possible that no clear source of the infection might ever be identified.

So far suggestions have been made the raw, insufficiently cleaned vegetables or salads could be a source of infection, while investigations are continuing in Frankfurt where all 19 people infected in the city had eaten at canteens run by consultancy giant PriceWaterhouseCoopers.

The number of people confirmed to have died in Germany from EHEC infection, which can cause fatal kidney failure, has reached three. But health officials said an elderly woman who died on Sunday in Stormarn, Schleswig Holstein, was not killed by the bacteria.

The latest woman to die was a 41-year-old from Cuxhaven – although she was being treated for the symptoms of EHEC infection since May 21, her cause of death will now be investigated. So far all those to die have been women, while it appears they are more frequently becoming infected than men.

Yet around 140 people are seriously ill with bloody diarrhoea and kidney failure as a result of EHEC infection, the RKI announced on Wednesday. Hundreds across the country are thought to be infected with the bacteria but suffering less severe symptoms.