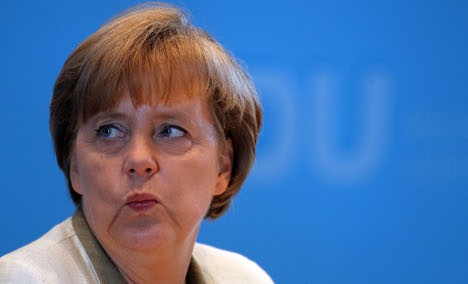 The economy is booming, unemployment has sunk to post-reunification lows, but Angela Merkel’s Christian Democrats (CDU) are having a tremendously dismal year.

They’ve been turfed out of power after state elections in Hamburg and Baden-Württemberg, and have now suffered the ignominy of finishing in third place behind the Greens in Bremen on Sunday. It was the first time the CDU has ever trailed the environmentalist party at the state level – but it doesn’t look likely to be the last, as the Greens set to do extremely well in Berlin’s upcoming election in September.

To make matters worse, the conservatives’ tradition coalition partner, the pro-business Free Democratic Party (FDP), has all but imploded. The party failed to win seats in several state legislatures this year, and despite recently shaking up its leadership, the FDP continues to wallow in national opinion polls.

The surging Green Party, by contrast, is now being touted as a serious challenger to the country’s traditional leading parties, or Volksparteien, the Christian Democrats and the centre-left Social Democrats (SPD).

But Germany’s proportional voting system makes single-party rule the exception at the state level and virtually impossible nationally, meaning the CDU is faced with dwindling prospects for obtaining and staying in power. Merkel, in particular, would seem to have very few palatable options.

Her party has shed much of its right-wing edge during her time as chancellor, but the defeat in conservative heartland Baden-Württemberg this March would suggest this is no longer a recipe for success.

However, should the conservatives now tack to the right, abandoning Merkel’s carefully crafted centrist course, they would all but condemn themselves to the opposition after the 2013 parliamentary election.

The best they could probably hope for would be to force the Social Democrats into another loveless “grand coalition” under conservative leadership – as Merkel governed for her first term from 2005 to 2009.

After a failed coalition experiment with the CDU in Hamburg, the Greens have made it clear they see little common ground with the conservatives. And although Merkel’s has said she would not chase after the Greens’ affections, she has already tossed away her party’s pro-nuclear power stance for political expediency.

Cleaving to the centre ground, with a nod to the environmentalists, however, could open up a new threat on the CDU’s right flank. So far, Germany has avoided the rise of a right-wing populist movement seen elsewhere in Europe.

If Merkel’s conservatives are forced to cater to left-wing parties, it could potentially pave the way for an anti-immigrant and Muslim-bashing party mimicking those in France, the Netherlands, Austria, Denmark and Sweden.

The unsavoury populists from the regional Rhineland-based party Pro Köln certainly make no secret of their national ambitions, as they attempt to present a more electable xenophobic alternative to their far-right brethren like the neo-Nazi NPD party.

It’s not a pretty thought: Increasing support for the immigrant-friendly Greens might end up giving Germany its very own Geert Wilders or Jörg Haider. At the same time, Merkel’s conservatives and their Bavarian CSU allies could be tempted to fish for far-right votes by catering to people’s baser instincts.

Fortunately Germany already has the best antidote there is to xenophobia and intolerance – a booming economy.