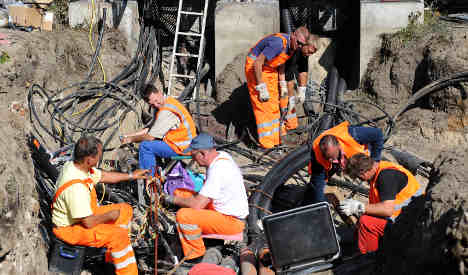 The leftists claimed in a note posted on the internet that they had set fire to an important rail cable on Monday in opposition to Germany’s use of nuclear power, militarism and restrictive asylum policies.

The probable political background to the attack at the Ostkreuz station, means that domestic intelligence officers are now in charge of the investigation.

Tens of thousands of people were affected by the incident, which caused serious transport problems running into Tuesday.

Spokesman for rail operator Deutsche Bahn Burkhard Alhert told public broadcaster RBB on Monday night that three S-Bahn signal boxes had been made unusable by the attack. Crucial information cables for safety, navigation and loud-speaker communications were also wrecked, he said. Workers had been at the scene all night to make as many repairs as possible.

Vodaphone customers were also badly hit, with many connections knocked out for the whole of Monday as an important connection ran through the same site, a spokesman said.

The head of the Green party in Berlin, Volker Ratzmann, slammed the leftist action as entirely unjustified.

“We condemn this attack. Violence has no place of the political debate. It is unspeakable to paralyse half the city,” he said.

Crucial clues to the fire being arson rather than an accident included traces of a flammable liquid found at the scene – as well as graffito painted onto a bridge above the site which said, in English, “Look Down.”

Germany’s railways have been targeted in the past, including an attack last November in Berlin by a militant anti-nuclear group calling itself Kommando Sébastien Briat. Damage caused by an explosion at the time led to rail disruptions in the capital.