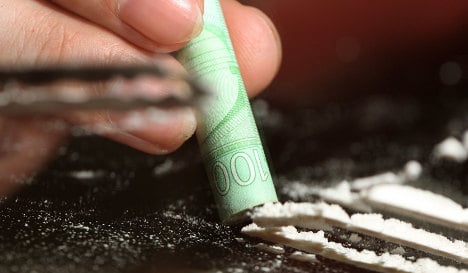 While Ergo, now owner of the Hamburg-Mannheimer insurer, investigates potential legal measures it might take against those involved in organising the 2007 sex party in Budapest, a video has emerged of a top sales rep taking what appears to be cocaine at a club on the Spanish island of Majorca.

The Bild daily posted images of the man and a woman openly snorting a white powder from a table on its website on Tuesday, blurring out the participants’ faces. The film was taken in Palma last September, the paper said, adding that it had similar pictures from another trip to Dubai last March.

“There was nothing that was not available,” one participant said of the trips.

A statement released by Ergo on Tuesday afternoon said the pictures showed people playing a drinking game with tequila, lemon and salt. This included, “snorting salt into the nose,” the statement said, according to the Handelsblatt newspaper’s website.

Ergo said it had statements made on oath from the participants that this was the case.

The Düsseldorf-based firm has been investigating the matter of the infamous Budapest trip since it was made public by the Handelsblatt last week, according to spokesman Alexander Becker.

The visit, which included the night at the historical Gellert thermal baths with around 20 prostitutes tagged with coloured wrist bands to indicate who could use them, was offered for the top 100 sales reps of the company.

Becker said on Monday that checks were being made to see if there was any legal complaint to be made against those involved. “Until now there is no such indication,” he said.

The Handelsblatt identified Kai Lange, co-founder with Carsten Maschmeyer of finance services provider AWD, as the organizer of the Budapest trip. Lange, who moved to work for Hamburg-Mannheimer in 1999, confirmed to the paper he had not only invited the sales reps on the three-day trip in June 2007, he was also there.

Entertainment was not only provided by the prostitutes, but also by fire-breathers, sword-swallowers and acrobats, while food was also provided. Lange said he had done nothing wrong, that he had stayed in the disco area the whole night, and had no idea what his sales reps got up to in the thermal baths. Lange left Hamburg-Mannheimer in 2008, the paper said.

There is also a ‘Top 5’ club of successful sales reps according to the newspaper, which went on foreign trips at least three times a year to places including Dubai, the Seychelles, Monaco and Kitzbühel, Austria, as well as Budapest.

The group supposedly has the motto, “The club where the extraordinary is ordinary”. During the day they take part in extravagant pastimes such as helicopter trips, playing on jetskis and diving. They stayed in only the best hotels, and partied at night.

“It was then like [Majorca’s party district] Ballermann with dancing on the tables, Hallelujah on tables and benches. There was everything, coke in the nose, belly dances,” one participant said.

Important managers from the Hamburg-Mannheimer were included in the trips.

Sales reps even openly took cocaine in Dubai – snorting it from a bar table in the Roberto-Cavalli club, the paper said. The Kaelum club in Palma on Majorca was the scene of the video in which a top Hamburg-Mannheimer sales rep took what seems to be cocaine.

The ‘Top 5’ club was set to go to Monaco next weekend to watch the Formula One race, but this trip has apparently been cancelled.

“We would separate ourselves from any representatives who were proven to take illegal drugs on our trips,” Becker told Bild