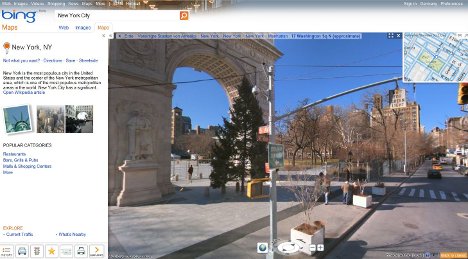 Now, Microsoft’s project is coming under intense scrutiny for attempting to do the same.

Fresh from their clashes with Google, privacy groups are challenging Microsoft’s right to publish photos of German residences without people’s consent, but the company maintains that its project poses no harm.

Mr. Blanchard, like Google, your company plans to start photographing the facades of German cities and making them available them online. What kind of scale are we talking about?

We have a concrete plan to photograph over 50 German cities using our camera-equipped cars, and then integrate the material with our “Bing Maps” service online. Each of these cities has more than 100,000 residents – so they are large cities, interesting areas with high population densities. Our plan to start shooting in Nuremberg, Fürth and Erlangen ultimately depends on the weather, as does the rest of our itinerary. But we are prepared.

When will the first cities be put online?

We plan to do so this summer, probably, or by autumn at the latest. But we won’t activate all cities at once. Mind you, our calculations dictate that we’ll need to cover and photograph about 150,000 kilometres of the country, and this process could take about 18 months. Our partner Navteq [an American company providing data and navigation services], which works with us all over the world, is providing us with between five and ten vehicles across Europe. But they won’t all be in German cities simultaneously; they will also be in France and Great Britain. Our work in Germany is part of a larger project.

The camera vehicles used by Google have already caused a stir, even triggered outrage, among Germans. What is Microsoft doing to maintain transparency?

We aren’t surprising anyone with this project. Anyone can view the project itinerary on our website, at any time. Every city we wish to visit is announced at least four weeks ahead of time. After the Franconian cities, after Augsburg and after Munich we will move northwest, toward Baden-Württemberg and the Rhine-Neckar region.

You are involved in an argument with privacy groups about whether Microsoft will allow affected residents to prevent photos of their houses appearing on the web. Unlike Google last year, you don’t intend to offer people the option to opt out beforehand. Residents affected by your project will be able to request photos of their houses to be removed only after they have been put online. Why?

The industry – which Google, our competitor, is also a part of – has drawn up a code of data protection for geospatial services through our partner Bitkom, with the backing of policy. Our position is that this code sets the framework within which we operate, and the code does not deem it necessary for us to allow pre-emptive exemption.

Of course, we are involved in discussions with privacy groups, and are trying to find a solution. But none of this puts our upcoming projects in jeopardy: it is simply a question of what ultimately happens to the data. Anyway, we are still a few months away from the activation of the “Streetside” service in Germany. First, we need to sift through and process the material.

Many German cities are virtually accessible through Google already. What does “Streetside” offer?

Similar products have certain similarities, of course. And yet, “Streetside” will not be “Street View.” With “Streetside,” not only can users move step by step through cities, but also much faster, block by block. That’s why we are also initiating the “Block View” function in this country. We believe this will facilitate mobile use, if people want to make a quick overview of their surroundings. The “Block View” function will mix the detailed, close-range view with the distant bird’s eye view. In addition, we plan to activate many more cities than our competitors have – with far more recent recordings, at that.