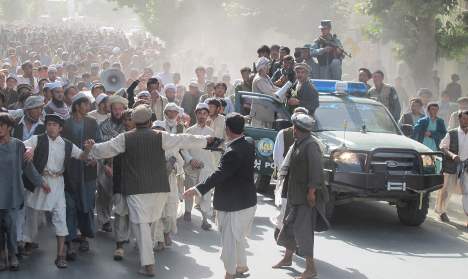 An investigation being carried out at the Provincial Advisory Team (PAT) base has so far established that German soldiers on Wednesday were shooting at protesters’ legs and in three or four cases, at their torsos.

“In one case, according to current information, a hit in the head-neck area cannot be ruled out,” a statement from the Bundeswehr released on Friday said.

The soldiers had followed the standard engagement procedures by first shouting and gesturing at the protesters, before firing in the air and then firing shots aimed at the legs of those who were still being threatening, it said.

“In three, possibly four cases (final clarification is not available) shots were fired on violent attackers (hand grenades, Molotov cocktails) in the torso area, arms and hands. In one case, according to current information, a hit in the head-neck area cannot be ruled out.”

At least 12 people were killed during Wednesday’s violent demonstration which was prompted by the deaths of four locals during a night-time raid by ISAF forces.

The PAT base, where 40 German soldiers are stationed, was surrounded by a group of up to 1,500 people, some of whom threw grenades and Molotov cocktails at the base. The police tried to calm the situation, and, the Bundeswehr statement said, also shot at some protesters.

Three German soldiers were hurt, one quite seriously while five Afghan security guards at the base were also injured.

Afghan security personnel eventually brought the situation in the town under control. Doctors said at least 12 people were killed and more than 80 injured in the violence.

Further demonstrations took place on Thursday, in front of the Taloqan police station and the headquarters of the provincial governor.

The Bundeswehr said on Thursday that it had established that German soldiers had shot at the legs of some protesters, hitting between seven and ten people. “There is no evidence that attackers were killed by shots from German soldiers,” said a statement.

Further statements were issued on Friday, the first of which said the internal investigation had been slowed by the precarious security situation in the town.

Afghan sources told the army that the riot had been planned a long time in advance and that the ISAF operation on Tuesday had only served as an excuse. “There were absolutely no accusations against German soldiers from the side of the Afghan government representatives,” the statement said.

But the incident is being taken very seriously, with General Mohammed Daud, police chief for the northern Afghan region, in Taloqan to speak with local politicians, religious leaders and elders to try to calm the situation.

Major General Markus Kneip, commander of ISAF Regional Command North, has taken over security measures for the German base, while ISAF has declared itself prepared to support the investigation of General Daud.

Kneip has put a team of investigators on the case, which started work by Friday morning.

Afghanistan’s President Hamid Kharzai has also sent an commission to the town to report back to him on what happened during the week.

The Federal State Prosecutor has been informed of the situation. A spokesman told The Local this was completely normal procedure and that no investigation had been launched.