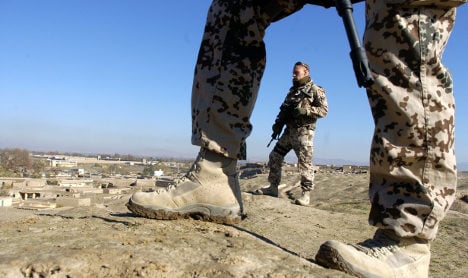 “When one looks around the world where soldiers – from New Zealand, Canada, Australia, the Netherlands, Norway – are deployed and why they are there, then one comes to the conclusion that it’s a privilege and honour for these countries to act as part of the international community, taking on international responsibilities,” de Maizière said in a radio interview.

“We must also ask ourselves such questions even when German interests are not directly at stake,” he told broadcaster Deutschlandfunk.

De Maizière on Wednesday outlined a large-scale shake-up in the armed forces which will see overall numbers slashed in a bid to improve efficiency.

But he also said that some 10,000 soldiers will in future be available on a permanent basis for intervention abroad, compared to just 7,000 today.

Jürgen Trittin, a leader of the opposition Green party which once advocated German neutrality, said de Maiziere was only saying openly what everyone knew.

Trittin warned, however, against the temptation Germany might have “to protect economic interests” abroad.

A member of the NATO western alliance, Germany long resisted foreign military involvement because of dark memories linked to World War II when German troops brief conquered much of Europe.

Over the past decade or so, however, Germany has increasingly sent troops abroad to act as peacekeepers, for example in the former Yugoslavia.

It has also taken part in UN-mandated operations, such as in Lebanon, and in NATO military operations, as in Afghanistan where it provides the third-largest foreign troop contingent.

But in recent months, many of Germany’s closest allies have questioned the dependability of Chancellor Angela Merkel’s centre-right coalition after it abstained from a UN resolution paving the way for military action against the regime of Libyan dictator Muammar Qaddafi.

Facing a barrage of criticism both at home and abroad, German Foreign Minister Guido Westerwelle said the undertaking was simply too risky for Berlin to get involved.