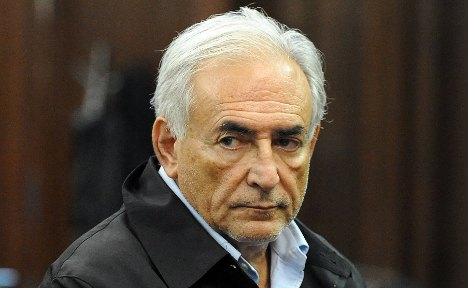 “The government respects the decision … This step will restore quickly the IMF’s full operational capacity. Dominique Strauss-Kahn did valuable work for the IMF during a difficult economic period,” a spokesman said in a statement.

Strauss-Kahn, 62, resigned late on Wednesday, four days after being arrested in New York on suspicion of sexually assaulting and attempting to rape a 32-year-old chamber maid in his luxury hotel suite.

“I want to protect this institution which I have served with honor and devotion, and especially – especially – I want to devote all my strength, all my time, and all my energy to proving my innocence,” Strauss-Kahn said. “I deny with the greatest possible firmness all of the allegations that have been made against me.”

The former Socialist finance minister, who had been widely expected to challenge Nicolas Sarkozy for the French presidency in elections next year, is currently in custody and has protested his innocence.

Later on Thursday his lawyers planned to go to court to seek bail, backed by the offer of a million-dollar bond and a promise that Strauss-Kahn will remain in a New York apartment.

German Chancellor Angela Merkel said on Thursday that given the IMF’s “strong involvement” in the eurozone debt crisis, Berlin wanted to see Strauss-Kahn replaced by a European, and for there to be a swift decision on his successor.

“I am of the opinion that we should propose a European candidate … I will name no names today but we will discuss it within the European Union,” Merkel told reporters.

“I believe it is of great importance also that we find a solution quickly, of course.”

She added: “Of course developing nations are within their rights in the medium term to occupy the post of either IMF head of World Bank chief.

“But I think that in the current situation, with serious problems with the euro and the IMF strongly involved, there is a lot in favour of a European candidate being put forward.”

Merkel said that the fact that Strauss-Kahn’s term of office had not yet ended – it had been due to end in November 2012 – should also “be taken into account” and put forward as an argument for having another European. She did not specify if she thought a European should only take over until November 2012.

The chancellor’s deputy spokesman Christoph Steegmans had said on Wednesday that there was “a whole range of highly qualified candidates” within Europe.

Christine Lagarde, French finance minister, and Axel Weber, until recently the chairman of the Bundesbank, Germany’s central bank, have been touted as possible front-runners for the job.

The IMF has contributed billions of euros to European bailouts of debt-ridden eurozone members Greece, Ireland and Portugal.