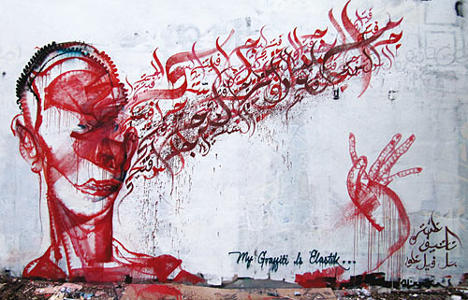 From an homage to the Yiddish-language poet Sholem Aleichem, to a documentary about France's Jewish population, two dozen films tackle the stories and issues woven into the lives of the Jewish community throughout the world. See works by filmmakers from the United States, Germany, Britain, Israel, France, Austria and the Czech Republic.

With swirling patterns and calligraphic motifs, Arabic street art embodies a style all its own. A new exhibition at the Common Ground Gallery in Berlin presents the work of graffiti artists from the Arab world. Stop by the opening Saturday night to see Lebanese typographer Pascal Zoghbi and German artist and writer Don “Stone” Karl present their new book “Arabic Graffiti.”

As Germany's financial capital, Frankfurt is renowned for its banks, but the Hessian city is also known for a few culinary specialities, including its famous green sauce. Honoured each year with a week-long celebration, green sauce is said to have been a favourite of Goethe's. Have a taste and vote for the best this week.

Each year in May, dazzling fireworks explode over Lake Alster in celebration of the pillowy pink Japanese cherry blossoms that bloom here. But this year, Hamburg's Japanese community is doing something a little different. In tribute to those affected by the earthquakes, a string of lights will illuminate the night waters, setting a tranquil, reflective tone. Gather along the banks of the inner Alster Friday night and pay tribute to the Japanese.

New York City's queen of the avant garde brings her latest project to Hamburg this weekend. Witness a poetic combination of poetry, visual effects, and electronic sounds in “Delusion.”

You love that jacket but you haven't worn it in ages. And that cute top? It's just a bit too snug. Ladies, clean out those closets! Swap in the City is coming to Munich this Sunday. Here's your chance to freshen up that wardrobe by trading in some of your old, but still good clothes for some fashionable new finds. Bring a minimum of three new or gently used pieces and let the swapping begin.

“Don't Think Twice,” head over to Amerika Haus Tuesday when Rolling Stone editor Maik Brüggemeyer and author Karl Bruckmaier talk Bob Dylan. Once the discussing's over, Todd Haynes' 2007 film I'm Not There pops up on the big screen. The talk is in German, but the film is shown in its original English version.