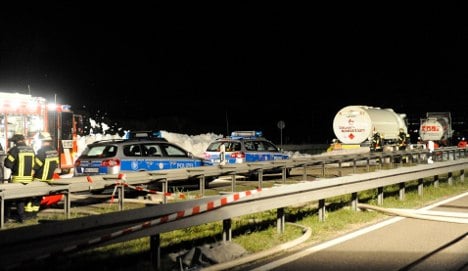 Police said the 43-year-old driver of the acid truck failed to see the end of a queue of traffic late on Wednesday and hit the petrol truck. Both tanks were torn open and thousands of litres of petrol and acetic acid leaked out.

Around 70 fire fighters were brought to the scene, including specialists who tried to pump the leaked acid into a holding tank. Some of the leaked petrol made its way into the sewerage system, prompting fears of a dangerous build-up of explosive gases.

The acid truck driver was badly injured and was taken to hospital. The 51-year-old driver of the patrol truck escaped with minor injuries.

Traffic was redirected on Wednesday night and into Thursday morning, yet jams measuring several kilometres swiftly built up along the alternative routes.

Access to Stuttgart Airport is massively hindered, with police advising those who have to catch a flight, to take a train to the airport.