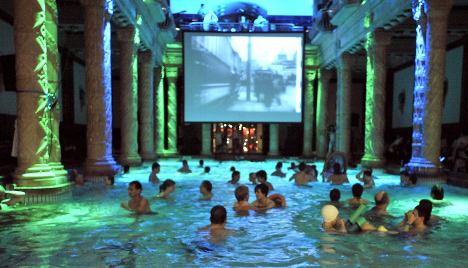 A different party at the Gellert thermal baths. Photo: DPA

The ‘incentive’ trip for the most successful sales reps at Hamburg Mannheimer took place in Budapest in June 2007, according to a couple of participants who have spoken to business daily Handelsblatt.

They described how the historical Gellert thermal baths was turned into an open air brothel for the reps – who were presumably all men and assumed to be heterosexual.

“I and the other participants were searched at the entrance, like the security checks at the airport,” said one, who added that it was made clear that it was strictly forbidden to take pictures or videos.

A second participant said that once everyone was settled, “The ladies came in and showed us what they had. It was clear to everyone taking part that they were prostitutes.”

A spokeswoman for Ergo, which now owns the Hamburg Mannheimer, confirmed the basics. “It is correct that in June 2007 there was an incentive trip to Budapest. Our research has revealed that around 20 prostitutes were present at an evening even during this trip.”

“The ladies wore red and yellow wrist bands. One group were there as hostesses, and the others were to fulfill any and every desire,” said one participant.

“There were also ladies with white wrist bands. They were reserved for the board and the very best salesmen.”

Four-poster beds were set up on either sides of the thermal baths, he said. “Anyone could go to one of the beds with one of the ladies and do what he wanted. The ladies were marked with stamps on their forearms after each such meeting. So it was recorded how often each lady frequented.”

Ergo said it regretted the case, which it described as “a serious violation of the rules of the company,” which would not be tolerated.

“The managers concerned and the board member responsible no longer work for us,” a statement released to the Handelsblatt said.

But the paper said that participants, whose statements were taken on oath, said that many of the general reps and managers who were at the party still worked for the firm.