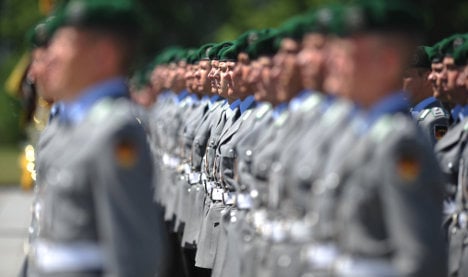 “The fact that an imminent conventional attack on Germany is now unlikely means that earlier troop numbers … are now unnecessary,” Thomas de Maizière said in a speech following a cabinet meeting to discuss the plan.

During the Cold War, Germany, divided at the time between East and West, stood on the front line of a potential conflict between NATO and Soviet-backed forces.

The reform, first unveiled in August by then Defence Minister Karl-Theodor zu Guttenberg, takes into account the end of conscription approved by parliament in March.

Germany was one of the few countries in the NATO military alliance to retain the draft.

In West Germany it was reintroduced in 1956 as a means of ensuring that the military never again became an elitist force with its own political power as was the case in World War II.

In East Germany, a professional volunteer force was set up in 1956, and conscription reintroduced in 1962.

Under the new plan, Germany will have a solely professional force of about 170,000 soldiers, along with 5,000 to 15,000 short-term volunteer recruits. Some 10,000 soldiers will be available on a permanent basis for intervention abroad.

The general-inspector of the armed forces, the highest military rank, will effectively become chief-of-staff and principal military advisor to the government.

Plans to close some of the country’s 400 military bases, always a hot political potato, will be discussed later in the year, de Maizière said.

The reform is partly aimed at helping save €8.3 billion ($11.0 billion) in military spending over the next four years, in line with an €80-billion package of austerity cuts decided in 2010. For the present, however, it appears unlikely that such savings will be achieved.

“The hoped for figures which I have come across (since taking office in March) under no circumstance fit in with the medium term financing that was planned,” de Maizière told ZDF television in comments seen as critical of his predecessor Guttenberg.