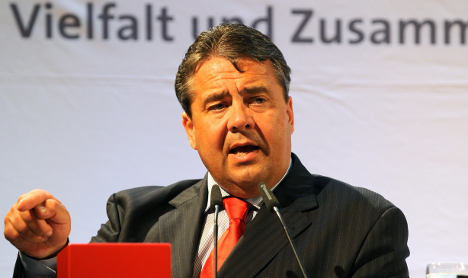 “What we are now experiencing is the preparation of a second nuclear deal from this (centre-right) government,” Gabriel told the website of business daily Handelsblatt.

“The nuclear power industry will get a renewed safety rebate as it did with the running-time extension of 14 years.”

He was referring to the declaration of Environment Minister Norbert Röttgen that in the light of a safety report on Germany’s 17 nuclear power stations, he saw now safety-relevant reason for an immediate exit and announced the immediate closure of four stations which did not meet the lowest safety standards.

The closure of just four of the eight nuclear power stations which were taken offline during a three-month moratorium period showed that it had never been taken seriously, said Gabriel, himself a former environment minister.

“It was designed to create time during which the state elections could be held and a lazy compromise be struck with the nuclear power industry,” he said.

The work of the safety commission was only a superficial check, he said, which now revealed how hectic and without a plan the government was operating on the matter.

The German exit from nuclear power could and should be effected by 2020, he said, by which time fossil fuel power stations should be modernized and renewable generation expanded.

“The remaining dangers posed by even the newer nuclear power stations will only be removed with such a decision,” he said.

Green party’s parliamentary leader and another former environment minister Jürgen Trittin said he was horrified that Röttgen had stepped back from the initial decision that the seven oldest and least safe nuclear power stations be shut down, leaving open the possibility that some of them be used again. “None of these old power stations should ever be reconnected to the network,” he said, calling for an exit by 2017.

“Germany produces more electricity than we use ourselves – although 11 nuclear power stations are currently closed. We are exporting electricity,” he told the Passauer Neue Presse.

Criticism has rained down on the work of the safety commission, with Olaf Tschimpke, president of conservation group NABU saying the fact that it was only considering evidence provided by the industry, it was practically worthless in terms of making a decision on potential closure. The nuclear-power critical doctors’ association IPPNW said the commission’s work was nothing more than a ‘friendly operator questionnaire’.

“It is as if one drove a car to TÜV (automotive safety check) and handed over a list of problems one had written oneself,” said Henrik Paulitz, from the IPPNW.