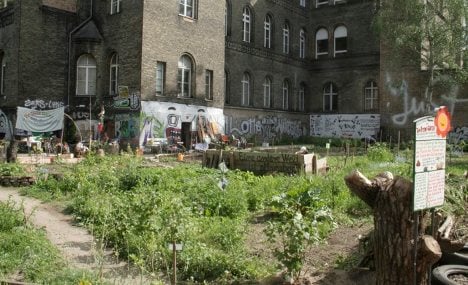 It’s a hot Sunday afternoon, and Japanese chef Tomoko Yamane’s plants are wilting in the blistering springtime sunshine. She refreshes them with a welcome splash from a hose.

Yamane runs a Japanese catering service in Berlin, and for this she needs fresh Japanese vegetables and herbs. So she was delighted to get the go-ahead to grow them at the Prinzessinnengarten, or Princess Garden, a popular public horticultural space in the scruffy district of Kreuzberg.

As well as being a hip cultural hub, the German capital also has a reputation as being one of the greenest cities in Europe. Apart from its many municipal parks, numerous “guerrilla gardening” initiatives have residents furtively tending overlooked patches of ground across the city. Many citizens have even taken over vacant, often derelict urban plots and turned them into neighbourhood gardens.

The Prinzessinnengarten grew up on a plot of land abandoned since the Second World War. Its founders Robert Shaw and Marco Clausen took inspiration from the urban gardening Shaw had witnessed in Cuba. According to Clausen, the space near where the Berlin Wall once stood had basically been forgotten during the city’s Cold War division.

“Now the area has been transformed by the garden,” says Clausen. “We want to show people where the things they eat daily come from, to become aware of alternative methods of producing food. Then they become sensitised for other topics, such as how to grow food sustainably, how to eat healthily, how to change the face of your neighbourhood and bring new life into it.”

The Prinzessinnengarten is explicitly open to the public. People can come see the gardening work being done, take part in the events there, and simply meet for food and drink at the café, where they also serve dishes using the garden’s own vegetable harvest.

Apart from the trees shading the café, however, very few of the plants are actually rooted in the ground. Instead, plastic sacks, industrial crates and even milk cartons stretch across the breadth of the garden, each one bulging with earth out of which the first seedlings stretch toward the sun. This type of mobile gardening that Shaw and Clausen developed makes the garden flexible for all seasons.

But it also allows for the fact that the Kreuzberg district and other parts of Berlin are transforming rapidly, in part due to gentrification. If their ground is sold out from under them, the Prinzessinnengarten will be able to pack up and move elsewhere.

Another city gardener, urban planner Lynn Peemoeller from Chicago, has been also been experimenting with the idea of mobile gardening. She and fellow American Luisa Greenfield decided to host a gardening demonstration in the leafy Prenzlauer Berg district. A number of derelict shopping trolleys stand about and, after Peemoeller begins her talk, it’s apparent they weren’t dumped there by accident.

“How can you make a garden in a city without access to land?” she asks. Her answer was the shopping trolley: “It’s the perfect shape, and it’s sturdy and deep.” Over the course of the afternoon, she gives visitors a crash course in growing vegetables in shopping trolleys that she found around the city.

To demonstrate its mobility, she wheeled her first attempt – a trolley full of potatoes – over to the decidedly un-green Alexanderplatz square. And when someone locked their bike to it and clearly never intended to return, Peemoeller pushed both around the streets of Berlin. Eventually, somebody dug up all the potatoes and scarpered off with them.

The politics of gardening

She also used her trolley garden system to make a political statement. When a garden community in the Neukölln neighbourhood was destroyed to clear the way for the A100 motorway, she salvaged plants from that plot and created a “rescue garden.”

“It’s a symbol of how plants are resistant in an urban environment,” Peemoeller says.

Greenfield came to Berlin to pursue garden projects and has made a video about the allotment gardens known as Schrebergärten in German.

“Berlin is the only European city I know of that will allow guerrilla gardening,” she says. “It gives the people different kinds of connections to their neighbourhood.”

Guerrilla gardening goes even further in a city with green-thumbed residents but little public money. Websites such as guerrillagardening.org and gruentmit.de help people network and describe how to cultivate even small areas, such as the square of free earth surrounding trees along sidewalks. Although, strictly speaking, residents aren’t allowed to dig up public land and plant private gardens, many district officials tolerate it – not least because the city doesn’t have enough money to green the areas itself.

Environmental group BUND also provides information. “We think it’s good for citizens to get involved and take responsibility for public spaces,” says spokeswoman Carmen Schultze. “It’s different than having a Schrebergarten. Lots of people can benefit from it.”

It’s a lesson on how sustainability, community relations and integration and how to change the face of your urban environment. Even if you don’t want to get your hands dirty, initiatives such as the Prinzessinnengarten offer a peaceful place in the middle of the city bustle to relax and meet likeminded folks at various events.

Yamane hopes to host a party in June or July and serve a Japanese favourite: her home-grown rapeseed.

“Germans use them for oil, Japanese eat the young plants,” seh said. “They taste very good.”