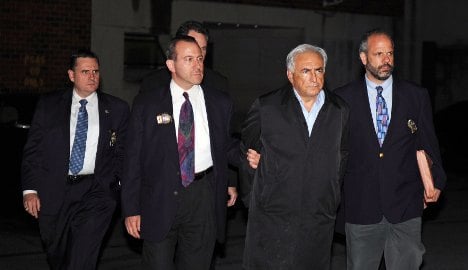 “We know that in the medium term emerging countries will have a good claim to the chairmanship of the IMF and World Bank,” she told a press conference.

“But in the current situation, there are good reasons to say that Europe has good candidates.”

Merkel’s comments came after her spokesman Steffen Seibert said Berlin wanted a European to replace Strauss-Kahn if he resigned because of the eurozone’s ongoing debt crisis.

“Europe doesn’t have a right to the director’s chair, that’s obvious. But in the current situation when the IMF is especially needed to fight the crisis in some euro states, the German government sees good reasons why there should be a good European candidate” to take over from Strauss-Kahn, Seibert told a press conference.

Should Strauss-Kahn be forced to resign “Germany would make this clear to its international partners,” he added.

Strauss-Kahn, a former French minister, was arrested this weekend in New York for allegedly trying to rape a hotel maid.

Seibert stressed that the case now rested with New York justice officials, adding that the International Monetary Fund chief should be presumed innocent until proven otherwise.

In the meantime, Berlin expects “the IMF to continue to play its role to the full,” Seibert added.

“The German government, along with other European governments, has spoken out in favour of Draghi taking over as head of the ECB should he decide to apply for the job, and it remains of this opinion,” Seibert said.

Draghi is set to be appointed the next president of the European Central Bank by eurozone finance ministers meeting in Brussels Monday, at a pivotal point in the eurozone debt crisis.