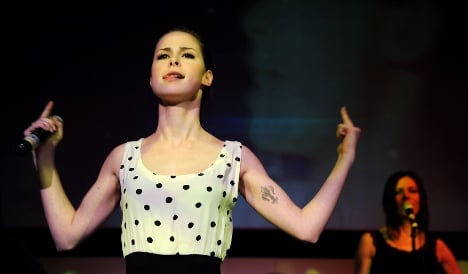 In a surprise knock-out, transsexual Israeli singer Dana International, who won in 1998, failed to make the cut in Thursday night’s semi at the Düsseldorf Arena in front of 17,000 Eurovision fans.

The Jedward twins, John and Edward Grimes, famed for their striking blond coiffed hair, are now regarded as the favourites with their song “Lipstick”, though French tenor Amaury Vassili is also a strong chance with the operatic “Sognu”.

The Grimes twins are easily leading the Google predictor rankings, which count the number of Google searches made outside the competitor’s home country and have correctly guessed the last several Eurovision winners.

Google has Lena in second place and Armenia’s Emmy in third. British bookmakers have Jedward as the close second after French opera singer Amaury Vassili, with duo Ell & Nikki from Azerbaijan in third place. The British bookies have Lena, with her sultry and suggestive title “Taken by a Stranger” in sixth place.

The British boy band Blue is also regarded as a fair shot at the title.

At their press conference after the semi-final, Jedward told reporters – newsagency reports of the press conference appeared unable to specify which twin was speaking – they would be the “Pavarotti of Eurovision” and added that their ambition was to “be crazy, have fun and laugh.”

Lena will perform at number 16 out of the 25 finalists on Saturday night. The full running list is as follows: