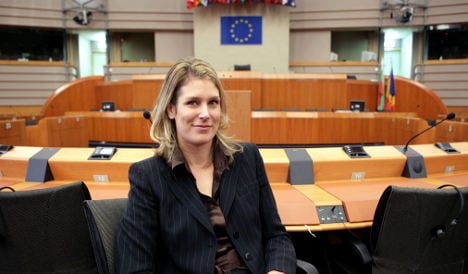 Her decision came shortly after she had a conversation with new FDP leader Philipp Rösler during which they agreed she would give up her jobs.

He had only just imposed his authority on the party in Germany and shuffled some of the more senior members’ jobs so as to get the crucial economics minister post for himself.

The party “respectfully acknowledges” Koch-Mehrin’s decision, and thanked her, “for her service in the liberal cause over many years,” said Christian Lindner, FDP general secretary and a close ally of Rösler, after her resignation.

Koch-Mehrin, 40, said her move was an attempt to protect her family as well as the party from the continuing consequences of the discussion over her doctorate.

Allegations that she used quotes from other publications in her thesis without properly acknowledging the sources have been circulating for weeks, while Heidelberg University, where she studied, has launched an investigation and invited her to submit a statement. It may strip her of her doctorate.

“I would like that this investigation be conducted confidentially, fairly and according to legal standards and without notice of my person, and not burdened by the fact that I hold high offices,” she said on Wednesday night – her first statement on the matter.

“I hope this step eases the new start that is being made by my party with a new leadership,” she said.

She was giving up her position as Vice President of the European Parliament, “so that I do not offer a target for attacks on the only democratically legitimate institution of the European Union,” she added.

Former defence minister Karl-Theodor zu Guttenberg resigned all his offices after his doctoral thesis was found to have been riddled with plagiarism.

The Bayreuth University published its report on the matter on Wednesday, concluding he had deliberately copied significant parts of the thesis. The public prosecutor is considering a number of formal complaints against him.