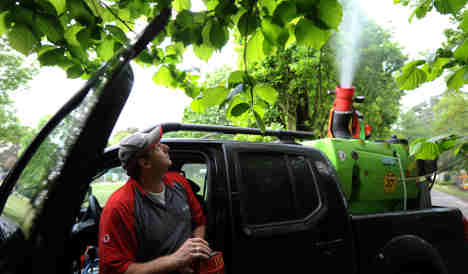 The Rheinische Post regional daily reported this week that spray teams are being sent to trees in which oak processionary moths have built nests to kill them before their hairy caterpillars can hatch and endanger people.

Authorities in Mönchengladbach have even sent a team in a helicopter to spray trees along the A44, A52 and A61 motorways, causing some traffic problems.

The spray used is said to contain a biological substance which while posing no danger to people, stops the caterpillar larvae from digesting food, causing them to starve to death before they reach the nasty, hairy stage of developments.

The nests, which can measure up to a metre across, can contain many thousands of individual caterpillars, are being increasingly found in northern Europe due to changes in the climate.

Fine hairs which cover their bodies can provoke severe irritations such as itchy rashes or conjunctivitis and even respiratory problems such as asthma or even anaphylaxis if inhaled.

“It would be fatal to disturb any of the nests out of curiosity, such as by poking them with a stick,” Reinhardt Leitz, from the German Dermatologists’ Association, told the Rheinische Post.

“The hairs from the caterpillars break off very easily and disperse through the air, which can then allow anyone in the area to breathe in a shower of toxins.”

The hairs contain the poisonous thaumetopoein protein which causes a pseudo-allergic reaction – it looks like a strong allergy but is experienced by everyone who comes in contact with it.

Although they are native to the warmer climates of countries such as Spain, rising temperatures throughout Europe have caused the moths to build their nests further and further north, with infestations recorded as far north as Sweden.

An outbreak of the insects in the Belgian province of Limburg in 2007 was so serious soldiers were deployed to burn the nests in order to exterminate them.