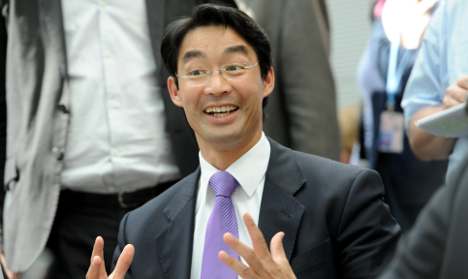 Rösler, who will officially be named FDP chairman this Friday, has been struggling to impose his authority the pro-business party, which is junior coalition partner to Angela Merkel’s conservative Christian Democrats.

Yet after lengthy negotiations, it has been agreed that current Economics Minister Rainer Brüderle will move to make way for Rösler, freeing him from the unpopular health minister’s job, not considered a suitable position for the party leader and vice chancellor.

Brüderle was only persuaded to leave the job by the offer of being made head of the FDP parliamentary group, where the 65-year-old will have considerable influence on party policy.

This in turn required the agreement of Birgit Homburger to give up her job to make the peace.

The FDP’s internal personnel shuffle means changes within Merkel’s cabinet, although it was confirmed that Foreign Minister Guido Westerwelle would remain in his job, despite having been discarded as FDP leader in favour of Rösler.

Rösler’s decision to become economics minister makes the way clear for his close colleague Daniel Bahr, 34, to take over at the Health Ministry where he has until now been state secretary.

The FDP’s parliamentary party met in Berlin to decide on how to reorganise its leadership, voting in a secret ballot on the different posts.

Brüderle got 95.5 percent of the vote to take over Homburger’s job after she received an at least partly standing ovation when announcing she would stand down to make way for him.

The personnel shuffle will be seen as a muted victory for Rösler, who is seen as the face of the new generation within the FDP and was said to have wanted to immediately announce his replacement of Brüderle at the Economics Ministry Brüderle but did not have the political clout to make him step aside.

The other two FDP ministers, Sabine Leutheusser-Schnarrenberger, justice minister, and Dirk Niebel, development minister, will remain in their posts.

Merkel welcomed the changes, saying she was looking forward to working with Rösler as head of the party. She told the association of foreign press (VAP) in Berlin she was pleased the FDP had decided to act now rather than in autumn at a later party conference.

She said this would help her ministers train their full attention on their work.

The FDP has been bumping along the bottom of public opinion over the last few months. The party failed to clear the 5 percent hurdle to secure representation in two recent state elections and only just managing to do so in a third.