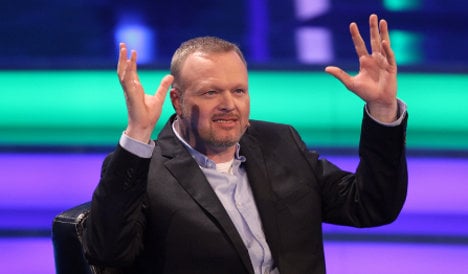 Not only did Raab, who has a popular talk show on German television, pull the strings behind Lena Meyer-Landrut’s victory at the campy song contest in 2010, the 44-year-old will also help present this year’s Eurovision in Düsseldorf.

His production company was also heavily involved in promoting Meyer-Landrut as well as the television show which chose the song she will sing this year – which he also presented.

“I’m not afraid,” he ahead of the first round of the competition on Tuesday. “It’s a very simple task for me, because I do it every single day – nothing can go wrong.”

Raab’s boundless self-confidence might be legendary in German entertainment circles, but the former butcher’s apprentice could have difficulty with the multilingual nature of Eurovision, since he isn’t known for his English prowess.

He has also been under fire for deciding to let Lena attempt to defend her title this year.

After sparking widespread Eurovision euphoria in Germany with her unexpected win in Oslo last year, Lena has found herself just hoping not to be embarrassed after taking the stage in Düsseldorf on Saturday evening. A tour she embarked upon ahead of the competition failed to reproduce the popularity of last year.

“Maybe trying to defend the title was a crappy idea,” Raab admitted to Der Spiegel magazine in February.

But he has remains defiant it was the right decision at the time.

“I told Lena: ‘Unless that was the highpoint of your career, we have to compete again’,” Raab said on Monday.

Obviously Raab won’t be performing as a musical act as he did in 2000 – but he will still take to the stage as one of three hosts as the Grand Prix is televised to an expected audience of 120 million.

However, the extensive influence he is having over nearly every aspect of Germany’s Eurovision efforts doesn’t sit well with everyone.

The epitome of mainstream entertainment in Germany, Raab has even been accused of “stealing” the campy song contest from the country’s gay community.

“It’s no secret that this (formerly) underground (event) was once embodied by gay men,” wrote the left-wing daily Die Tageszeitung last week, lamenting that Raab’s teen creation Lena was not a figure homosexual men could identify with.