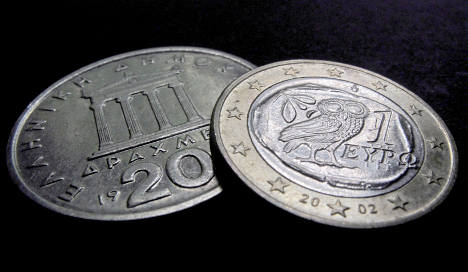 EU politicians are furious that the website of Der Spiegel published a story on Friday saying that the crisis-hit Greek government was considering a ditching the single currency – just as ministers were meeting to discuss how to prop up the heavily indebted country.

“Someone in Berlin is spreading confidential information in an unacceptably irresponsible manner,” one high-ranking representative from at eurozone member told the Süddeutsche Zeitung on Tuesday.

“They are throwing Greece and the euro to the speculators with this,” he said.

The euro did in fact fall on the currency markets immediately after the news was published, just as ministers were starting their supposedly secret deliberations.

The meeting itself – to discuss what to do about the Greek economy which is plagued by high debt levels, high unemployment and a continuing deep recession – was only made public via such an indiscretion.

An agreement had been made that those in the meeting would keep quiet about it until at least the close of business on the US financial markets in an attempt to prevent currency speculation. All participants had kept to this agreement apart from Berlin, one participant said.

The leak had made it impossible to discuss what to do about Greece in peace – and made those who had agreed to keep quiet, look like liars.

“There are people in Germany who deliberately spread rumours and half-truths,” one European critic told the Süddeutsche Zeitung. “Either they are being irresponsible or they are following an agenda, the latter of which would of course be a catastrophe.”

A potential Greek withdrawal, “was never and is not up for debate,” said German government spokesman Steffen Seibert on Monday, although he admitted it made no sense to deny the fact of Friday’s meeting.

Der Spiegel’s website on Tuesday quoted Guntram Wolff from the Brussels think tank Bruegel saying the 2 percent dip in the euro against the dollar on Friday would not necessarily have happened if the meeting had been announced.

Those at the meeting included the finance ministers of Germany, France, Spain and Italy as well as top representatives of the European Commission and the European Central Bank (ECB). They had all been invited by eurozone head Jean-Claude Juncker.

The German government has so far failed to provide its eurozone colleagues with a united front on solving the Greek problem, while ECB representatives warn the longer it takes, the more expensive it will become. The ECB has Greek bonds worth billions of euros which would have to be written off if the country officially goes bust.

But speculating on whether or not Athens can repay its debts does not help Greece, German Chancellor Angela Merkel said on Tuesday.

“We don’t do Greece any favours if we speculate” on the outcome of reforms and how the country will manage its public debt, Merkel told a press conference.

EU, ECB, and International Monetary Fund auditors are currently involved in a quarterly review of the Greek reform drive amid worries that Athens could default.

“The mission is still in Greece. It is my understanding they will be there

until the end of the week,” Merkel said.

“I am of the opinion that the conclusions to be drawn from the findings must await the findings,” she added when asked if Germany was prepared to agree to additional aid for Greece.