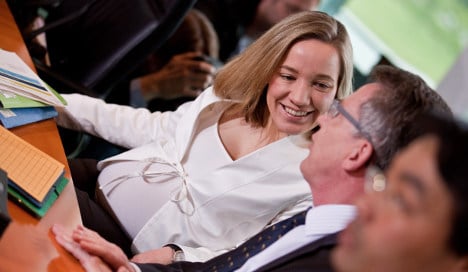 Schröder, herself due to give birth in June, told Süddeutsche Zeitung she found it ”intolerable” that couples wanted children but couldn’t afford the cost of medical treatment.

“We hardly talk about it, but in truth most people know friends or relatives who have this misfortune,” she said. “These people suffer terribly from it and are often seriously affected in a second way because they are quickly faced with a blanket accusation of hedonism.

“We greatly overestimate the number of people who actually don’t want children.”

Many couples were in despair and deserved to better treated by politicians, she said, noting their reasons for remaining childlessness varied widely. The conflict between career and family played a role, as did the lack of a suitable partner.

But she said increasingly common were medical problems were arising through factors such as the later ages at which people were having children.

The Family Ministry estimates that nearly one in 10 couples aged between 25 and 59 were involuntarily childless and reliant on medical help.

Schröder said there needed to be more financial help for treatments such as in vitro fertilisation (IVF) and more opportunities for adoption.

“I find it intolerable if the hope for children is dashed because of money,” she said. “I get many letters from couples who tell me how they painstakingly scrape together the money, then despair when it doesn’t work, and start saving again – all that with the pressure of the biological clock ticking.”

In any case, Germany urgently need to help such couples because of its sinking birth rate and looming demographic challenges, she said.